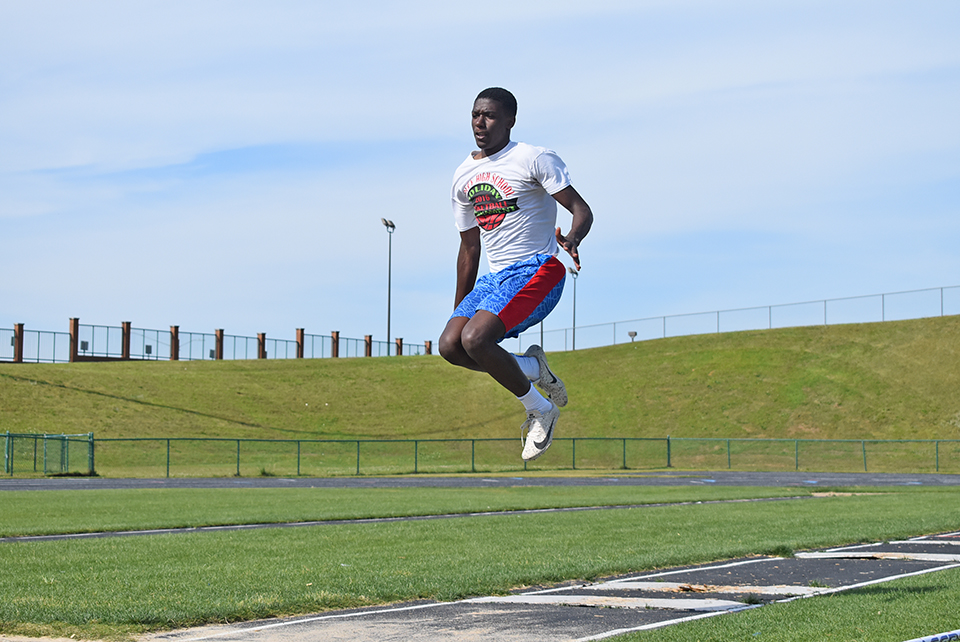 VALLEY  — Jacquez Trammell was 12-years-old the first time he dunked a basketball.

“I think in the seventh grade is really when everything just spiked because he dunked,” Trammell’s mom Latisha Mangram said. “It wasn’t so much my reaction, it was his peers and people in the stands who were amazed by it.”

The 6-foot-3 sophomore is still catching alley-oops and pinning shots against the backboard with his AAU basketball team this spring, but his primary focus is currently on winning a state championship in track and field this upcoming weekend.

Valley head track and field coach Ronnie Hall said that he expects Trammell to win at least one gold medal at this weekend’s meet, and he can only imagine how many individual championships he’ll end up with once he graduates in 2021.

“It makes me feel good because he has faith in me,” Trammell said of Hall’s words. “He has faith in our team. We’re a pretty good team, we can do a lot of things and a championship is in our future.”

In addition to qualifying for the triple jump, long jump and high jump, Trammell was also apart of the 4×100 relay team that have given themselves the “four-headed snake” alongside Dominic Whitlow, Josh Heath and DonReco Glaze. The four athletes all wear headbands during the meets and are a close group on-and-off of the track. Whitlow, a senior, is standing near Trammell during an interview to offer moral support to his teammate.

His goal for the four-headed snake is simple

“[I hope] that we can beat everybody out there,”  Trammell said. “Win, get the points for the team and surprise everybody.”

Trammell began playing basketball around the age of five. He said that the sport is still his main passion. He grew up in a household with two older brothers who played sports as well, including one brother that played football on a collegiate level. Competition is something that Trammell has always been drawn to.

“He has older brothers, they kind of pushed him and they all are very competitive,” Mangram, who also serves as one of Valley’s assistant track coaches, said. “Especially the brother that’s next to him, the second oldest. He’s very competitive,  so all of them always have been.”

Trammell’s favorite dunk is the two-handed 360 slam. He posted a slo-mo cellphone video of him jumping over two of his teammates to finish a one-handed jam on his Twitter page. For his first in-game dunk in eighth grade, he said that the team urged him to dunk so he went up, attempted it and was surprised as the rest of the crowd when he made it. He said that he still shocks himself when he has moments like setting the school record for the high jump at 6-2.

“I don’t know,” Trammell said after taking a second to ponder why jumping has come so natural to him. “Yeah, the good Lord, I’d have to say.”