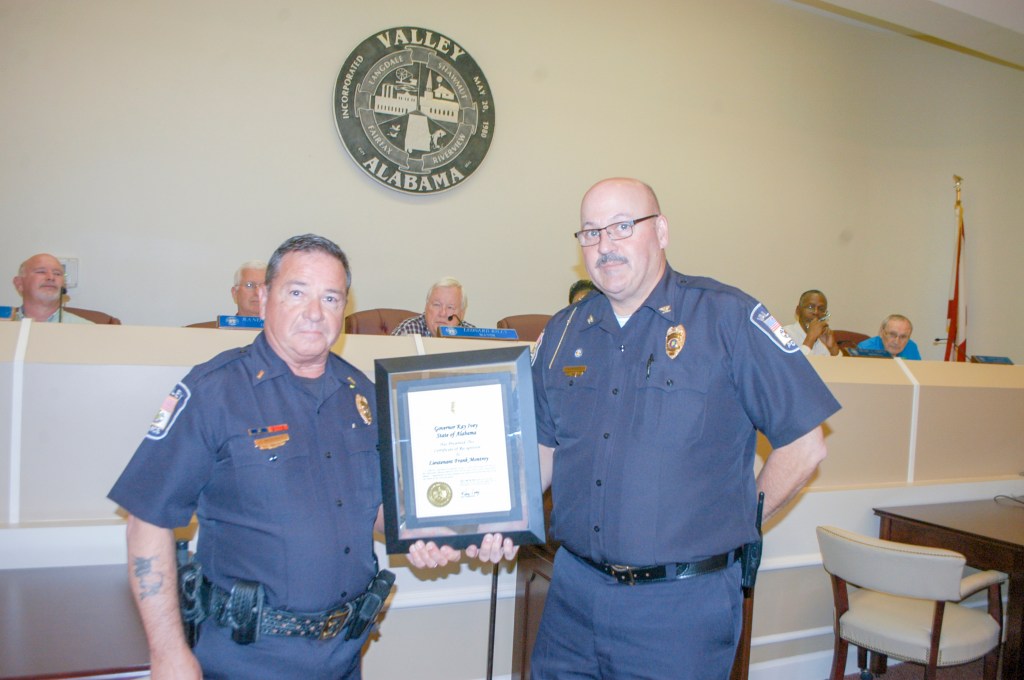 Valley Police Lt. Frank Montroy stands with Valley Police Chief Tommy Weldon Monday night after receiving a plaque from the city for his 15 years serving on the Valley Police Department.

VALLEY — Starting in July, Valley residents will see a slight increase in what they pay for garbage collection.

“I thought $2 was too much too quick,” Mayor Leonard Riley said.

Riley said that an increase was justified, given that Mr. Greenjeans has absorbed an 8 percent increase on its landfill fees plus the fact that the cost of fuel and insurance is on the rise.

Seniors, who have been discounted for some time, will be paying the higher rates with everyone else. Seniors make up approximately 750 of the city’s 3,320 accounts. There are 2,560 regular accounts and 99 hardship customers who have free service. The city has a delinquency rate of just under 15 percent.

Riley and the council wished Lt. Frank Montroy a long and healthy retirement. He’s leaving the Valley Police Department after 15 years with the city and 25 years altogether in law enforcement in Alabama. He was in Phenix City prior to coming to Valley. Chief Tommy Weldon said that Montroy had served the department well in many capacities.

“It might take three new officers to replace what he did,” he said.

Montroy received two plaques, one from the city and another one from Alabama Gov. Kay Ivey. Montroy thanked the city for the opportunity to work with VPD and said he had had a very good experience in Valley. Following the council meeting, a reception for Montroy and his family took place in the conference room at city hall.

In another presentation, Council Member Randall Maddux read a mayor’s proclamation and presented a copy of it to Valley Haven Board Member Sam Bradford encouraging everyone to take part in Saturday’s 43rd annual Hike/Bike/Run fundraiser for Valley Haven School.

“Valley Haven School serves close to 100 clients,” Bradford said. “Three’s lots of heartwarming love that goes on out there every day. What we need more than anything is some younger people to get involved. A lot of us who have helped out in any way we can are getting older now.”

Bradford said that there’s is very good cooperation right now between county government and the cities. He cited the recent electronic recycling as an example. The county collected two tractor trailer loads from rural residents and had it transported to the Valley Farmer’s Market pavilion, where it was collected by a private company that was gathering electronic items for the city.

In other business, the council suspended the rules and adopted upon a first reading an ordinance to annex into the city a 27-acre tract of land near I-85. The city recently purchased the land from the Stuart family. It’s between 55th Street and the Upper Room Church property.

The council unanimously approved a three-item consent agenda. Two of the items dealt with purchases and another permitted the consumption of alcoholic beverages at an upcoming reception at Valley Community Center.

The council approved an off-premise beer and wine license for the Family Dollar store, located on Highway 29 in the Fairfax community.

At the end of the meeting, Mayor Riley said that April sales tax collections were looking very good for the city. That continues a trend that’s been going on for some time.