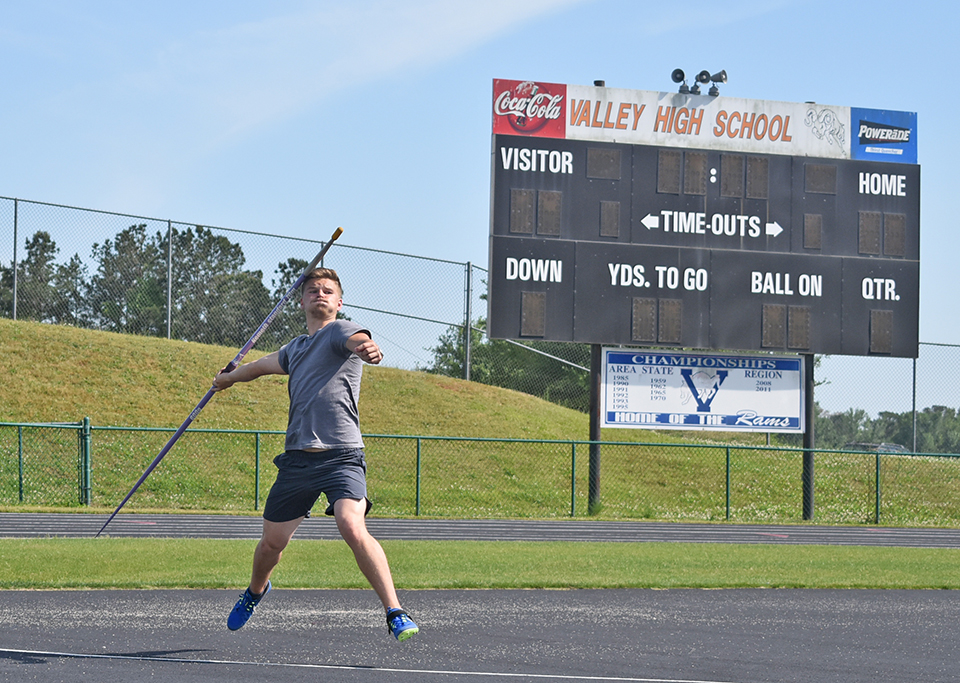 VALLEY — The Valley Rams qualified more than a handful of athletes for last year’s state championship meet, and the team even came away with top-five finish with then-junior Daniel Etherton in Javelin.

This year, however, the team isn’t happy to be at state, the Rams want to win at state.

“This is the best one,” Valley senior Dominick Whitlow said about this season’s 4×100 team compared to years past. “The communication, the handoffs. On this team, we have the fastest times compared to all of the other teams in the past. You can tell, the communication shows on the track.”

Whitlow and the boys’ 4×100 team, Whitlow, Josh Heath, Donreco Glaze and Jacquez Trammell, have given themselves the nickname of the four-headed snake this season. The group has made their own shirts and all wear headbands to show the team’s togetherness throughout the year.

Etherton said that the key to him winning a state championship in his final attempt for Javelin is to approach the event with a calm mindset.

For seniors like Whitlow and Etherton, this may very well be the last chance at competing in an official track and field meet. For Patrick Pigg, however, this is his last until the fall when he begins training with Auburn University at Montgomery to begin his college career. This weekend, he’ll participate in the 1600-meter and 3200-meter  runs individually as well as being a part of the 4×800-meter relay team.

“I want to go out there with a goal of being in the top 10 in both events,” Pigg said. “I want to get up there with the lead pack in the 32 because that’s my main race. I want to get out there, stay with that lead pack and put my heart into it. I’ve trained for it all year long and I’ve had my mind set on this since the beginning of January. Everything’s going smooth.”

Pigg said that he suffered a hip injury a few weeks ago, but he’s physically healed from the setback. The senior said that he wants to continue working on getting over the mental block of the injury this week in practice.

“I know this last race is going to be my best one yet,” Pigg said. “As long as I go out there and do everything to stay at the top.”

The Rams are taking the road trip to Gulf Shores this weekend for the state championship meet.