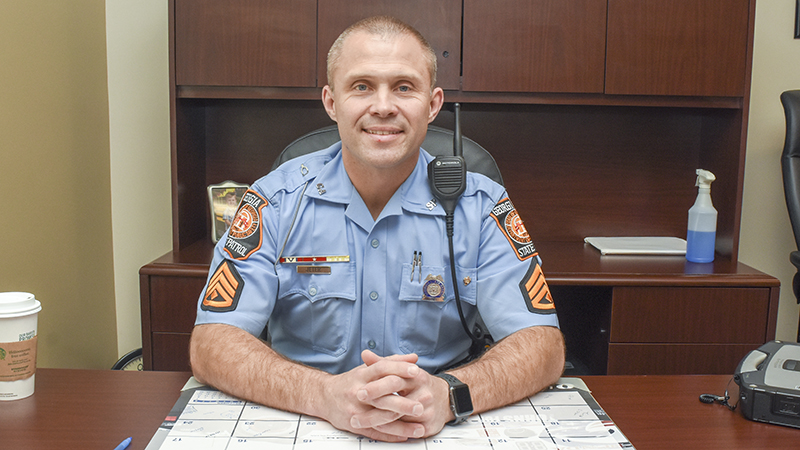 The local Georgia State Patrol office in LaGrange has gone through a change in leadership this month, with Lt. Maurice Raines being promoted to a new position.

Raines’ replacement will be a name many in LaGrange know well, as Scott Jeter is back in his hometown, leading the post that oversees Troup and Harris Counties. Jeter has an extensive history in GSP, holding numerous positions across the state. He’s more than qualified for his new role, and given his link to Troup County, he figures to serve this area very well.

That was always his ultimate goal — to get back working in Troup County. He said that the post commander job in LaGrange was always a dream of his, and now it’s become a reality.

Jeter graduated from Hogansville High School and has kept a residence there, even driving an hour away for his training position in Atlanta for many years.

The state patrol in that area stays extremely busy, considering the business of traffic on Interstate 85 and Interstate 185. GSP also handles all of the wrecks in the Troup County Sheriff’s Office jurisdiction.

Jeter said one of his first big focus points includes the hands-free driving law, which is still relatively new to Georgia. It’s clear based on statewide statistics that some communities have put a bigger focus on it than others, but at the end of the day, the law is about making roadways safer.

Jeter spoke about that Wednesday, noting that that’s the intent of the law whether it’s achieved through warnings or writing tickets.

He also mentioned other services GSP provides, such as car seat checks. It’s clear he wants troopers visible in the community, serving the people who live here and making this area a better place to live.

We look forward to working with Jeter and wish him luck in his new role.