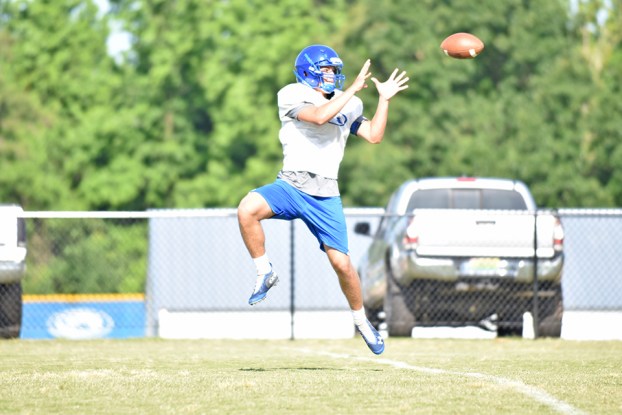 SPRINGING INTO ACTION: Chambers Academy and other local football teams are back in action for spring practice before the end of the school year. Photo by Rashad Milligan

Football is, sort of, back in the Greater Valley Area.

For the past couple of weeks, teams have been suited up in practice uniforms to get in spring reps before the end of the school year.

Beulah’s situation has been a bit different this spring dealing with the loss of head coach Cody Flournoy to 5A Jackson High School in Jackson, Alabama. The various assistants remaining on the staff, who all turned down the opportunity to join Flournoy in Jackson, alternated roles during the Bobcats’ practices this spring. Due to the coaching vacancy, the Bobcats decided not to have a spring game this year.

Beulah returns after a large turnaround from losing a handful of key players in the class of  2019. Starting quarterback Lonzie Portis, linemen Hunter Bryant and Isaiah Glidewell, linebacker Caden Dowdell all have to be replaced next season. Caleb Abney was the projected starter at quarterback next season going into spring practices. Running back Chris Person will be the focus of Beulah’s offense next season as a returner.

Chambers Academy returned to practice this week to begin its state championship defense. The Rebels are playing in a spring jamboree on Tuesday at Autauga Academy in Prattville. The game will kick off at 6 p.m. EDT.

LaFayette is also back at practice after making another postseason run last year. The Bulldogs are hosting their spring game this year against Tallassee on May 17 at 7 p.m. EDT.

Lanett wrapped up spring practice on Friday afternoon. The Panthers are not playing a spring game this year.

While Lanett is losing all-area players Tifton Dobbs, D’Terrion Glaze, honorable mention Kolby Davidson and Player of the Year Trikweze Bridges, the Panthers are returning a nice amount of key players led by senior Kristian Story. Quae Houston, Larontavious Hurston and B.J. Smith are projected to return to the lineup as well.

Springwood returns as head coach John Gartman will have his first full season with the Wildcats under his belt this year. Springwood is not playing a spring game this semester.

Valley is also back to work after ending a playoff drought last season. The Rams are making the short trip down to Opelika on May 17 for this year’s spring game.

OXFORD — The Beulah softball team’s (23-8) season ended on Friday in the east regional round of the playoffs. The... read more