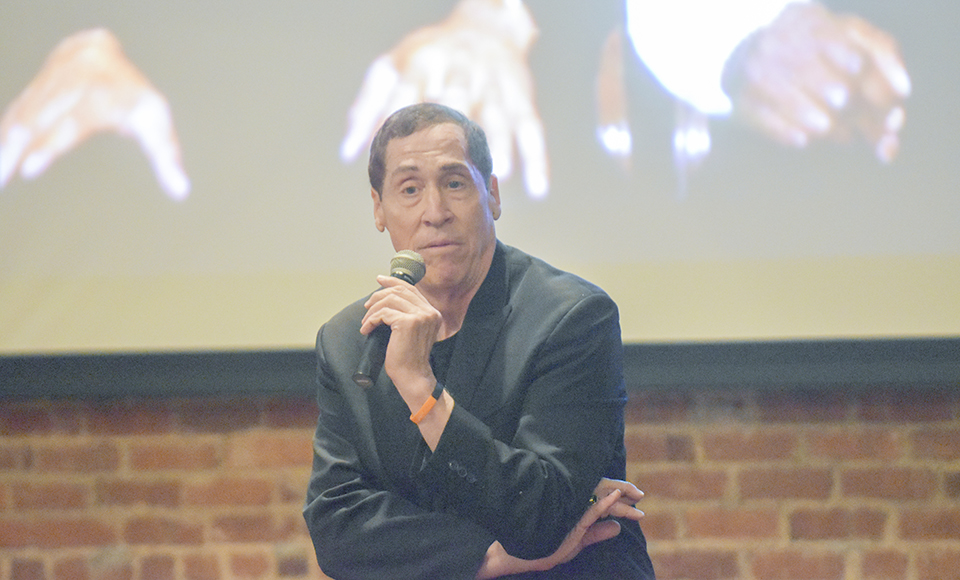 Legendary broadcaster Roy Firestone entertains the crowd gathered at the Del’avant on Wednesday night for the Boys & Girls Club of West Georgia and Chambers County, telling stories of his experiences with famous athletes. - Baker Ellis

The Boys & Girls Club of West Georgia and Chambers County held a fundraiser Wednesday night at Del’avant Event Center in LaGrange that included a silent and live auction as well as a performance by broadcasting legend Roy Firestone.

The event, which drew more than 100 people, has been a staple for the club since its inception 27 years ago, and is the ‘crown jewel’ of the fundraisers the organization does throughout the year, said President Kevin Cain.

“As a 501(c)(3) organization, we rely almost exclusively on contributions, grants and fundraisers,” Cain said. “This is a major fundraising source for us. We try to do two to three events a year. This one is perhaps our crown jewel.”

Cain moved into his role as president of the organization approximately two months ago after transitioning from a longtime position with West Georgia Tech and is still getting used to his new role.

However, he recognizes the mission of the club as vitally important in the development of the community’s youth.

Between the club’s four locations, more than 300 children are served per day.

“On any given day, we serve about 300 kids between our four sites,” Cain said. “I believe in the mission.”

The event itself featured a silent auction, with items for sale including University of Georgia and University of Alabama sports apparel, as well as items signed by cast members from the popular HBO show Game of Thrones and many other items. Jason Brooks, a live auctioneer with Van Byars Auction out of Hogansville, also made a guest appearance and treated the crowd to a live auction of two items.

The main attraction, however, was a performance by Firestone, who treated the crowd to a plethora of stories from his decades-long career in sports journalism. From Wilt Chamberlain and Shaquille O’Neal to Mike Tyson and Muhammad Ali, Firestone brought his unique and engaging personality, as well as his singing talent, to the crowd gathered.

Others recognize the importance of the work done by the Boys & Girls Club as well, as United Way of West Georgia’s President and Executive Director Patty Youngblood emphasized the club’s importance.

“The Boys & Girls Club is a safe place for kids after school, it embodies [traits like] learning a skill and giving back to the community,” Youngblood said. “Boys & Girls Club is open when there are holidays from school, they do great summer programs. Parents can be secure in the fact their children are going to have a safe place to go, and they are going to learn the skills to become productive members of our community.”

Youngblood also said that out of the 25 nonprofit organizations United Way of West Georgia supports, the Boys & Girls Club of West Georgia and Chambers County receives the second-most funding, behind only LaGrange Personal Aid.

“The Boys & Girls Club is our second-highest funded agency because of the work that they do,” Youngblood said.