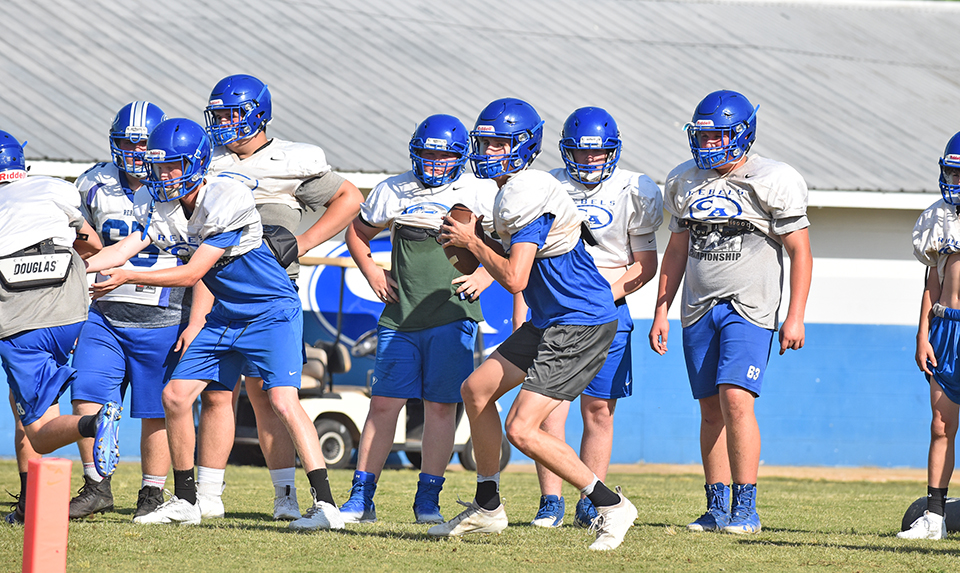 LaFAYETTE — Whistles were blown and non-tackle contact was made on Tuesday afternoon on Tolbert Field as day two of spring practice went on for Chambers Academy.

This year, head football coach Jason Allen wore a new accessory as he pumped up his players- the 2018 AISA A State Championship ring.

“It’s nice,” Allen said while looking down at his newest piece of jewelry. “We actually talked about that today. It was nice to win a state championship, there’s a lot of relief, but if you’re a champion in life, you want to win every day. You cannot rest on what happened yesterday. This is a new team, we’re glad to be defending state champs. Now, that’s behind us, and if we keep focusing on that, we won’t be repeating as state champs. Our goal is to win two in a row, this is a different team. I’m proud to coach these guys.”

This season, Allen said that he expects rising seniors Braxton Allen, Jake Waldrop, Brody Smoot and Caydon Smoot to step up in leadership roles to replace the Class of 2019.

The offensive weapons looked a bit different during Tuesday’s practice, as Caydon Smoot was lined up on the outside as a primary receiver of sorts, and Raphe Daniel, who sat out the end of last season after transferring from Valley High School, was slotted into the lineup as a tight end. The biggest surprise, however, was perhaps seeing last season’s leading-tackler and lineman Dijon Darden get reps at full back in the backfield. Darden has never played the position in his career.

“We decided that we needed a little more depth at that position, and we’re really stacked upfront with a lot of bodies,” Allen said. “We felt like we could afford to make that move right now and see how that works out.”

Chambers Academy travels to Autauga Academy in Prattville next Tuesday night to play in a tri-squad jamboree with Escambia Academy.

“Us coaches understand that it’s just about getting better,” Allen said. “We’re not really worried about scores, we just want to get reps for our kids. Everyone wants them to  play, and we want to get it on film so we can work on the things that we need to work on in the offseason.”