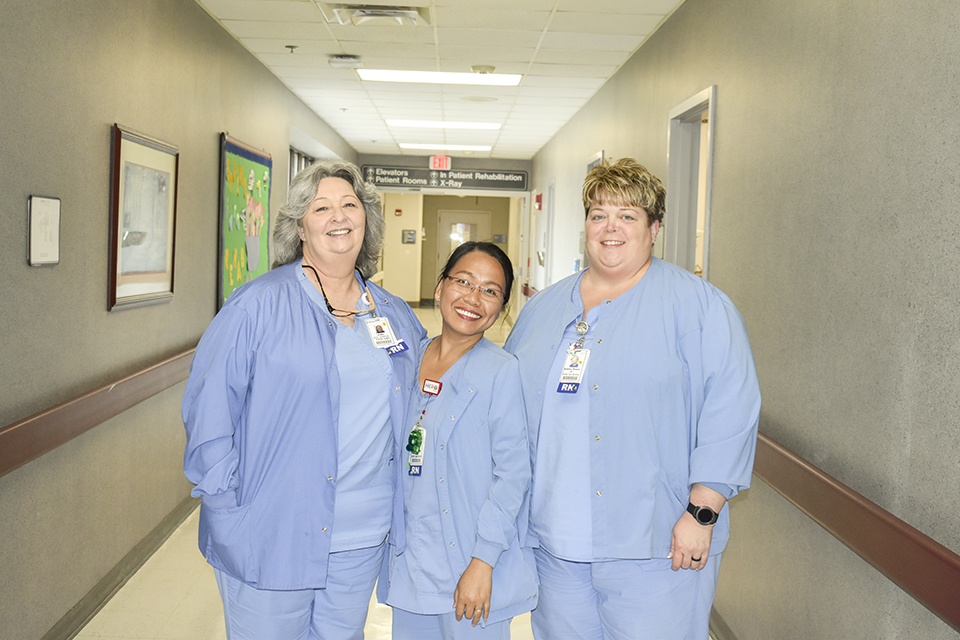 Nurses at EAMC-Lanier lean on each other to get through each day. Pictured above are Donna Ivey, left, Joylin Peters, middle and Kathy Thrower, right.

The nurses at EAMC-Lanier spend much of their time caring for the individuals in Chambers County within the hospital walls, but according to Nurse Administrator Donna Ivey, they take care of each other as much as they take care of the patients.

Ivey said there is a fund within the hospital staff that is ready to be spent if somebody faces a tragedy, and if somebody is hurting, they definitely won’t go hungry.

“We all take care of each other,” Ivey said. “We may not be related, but we are.”

May 6 through May 12 is National Nurses Week in the U.S. and is a week to appreciate the work that nurses do everywhere, including in Chambers County.

Joylin Peters, who is originally from the Philippines, moved to the U.S. when she got married and had no clue what she was going to do professionally.

With a background in journalism, she turned to nursing as a second career. Not only does she have a deep passion for caring for people, but she has a personal reason as well. Her husband is a paraplegic and even though she said he is very independent at the moment, she knows there will come a time when he depends on her more and more.

“He is my motivation,” Peters said. “I would like to be able to take care of him.”

Kathy Thrower will celebrate her 25th anniversary in nursing this December, but like Peters, she didn’t set out to be a nurse — it found her.

She moved to Huguley from upstate New York and said she knew she was a caregiver and loved the idea of taking care of people.

“That’s the biggest part of it,” Thrower said. “I’m just a caregiver, and I love taking care of people. That’s who I am.”

Ivey has been a nurse since 1986. She remembers a time when the color of pen used on medical charts was how everybody else knew what shift that nurse worked. Unlike the previous two, Ivey said she may have been programmed to be a nurse by her grandmother.

She said they would spend hours when she was a child watching medical shows, and it just stuck.

“I enjoy taking care of people,” Ivey said. “We all enjoy our job, and most of the time we go home satisfied, but there are other times we go home crying.”

She said nurses in Valley get attached to patients, especially the ones they see regularly. The hardest moments are when a patient doesn’t show up for a regular appointment, and they find out it is because they are deceased.

Ivey said although those moments are hard, nurses have to believe they did the best they could to care for a person.

“If you know you have done everything to the best of your ability and did everything you know that could be done for that person — you are sad, but you are satisfied knowing you did the best you could while you were with them,” she said.

Thrower said sometimes it’s not just about the medical aspect nurses bring to helping a patient.

“It’s not just the medicine,” she said. “Sometimes they need somebody to give a hug or hold their hand or cry with them or just sit in the room and don’t even say a word.”

Peters said nurses and the rest of the hospital staff generally function better in stressful situations and the longer a person is in the industry, the better they learn to suppress their emotions.

“You feel it, but you learn to deal with it,” she said.

Ivey said there are highly emotional moments in a hospital but nurses know the patient doesn’t need a nurse to be sad for them, they need them to care for them. She said the patient knows if they are gravely ill or terminal and usually the family is around for those emotions.

“They don’t need that from us,” she said. “We train to be what our patients need at the time. But those are the ones that on your way home at night that get to you.”

Ivey said that doesn’t mean nurses aren’t human and the impacts of daily work at a hospital still hit them later.

“Once the adrenaline leaves, that is when you fall apart,” Ivey said.

“If I get to a point in my career that I am not crying anymore, I don’t need to be doing this,” she said.

The schedule for most nurses is also atypical. Ivey said she works seven, 12-hour shifts in a row, then has the next seven days off. Peters works four 12-hour shifts one week and then three 12 hour shifts the following week. For those two, if a holiday lands on one their days in the hospital, they are at work.

Thrower works Monday through Friday 6 a.m. to 2:30 p.m., which she admits is a good schedule for nurses. However, it doesn’t mean that at 2:30 p.m. she clocks out and forgets about the hospital. In fact, she said if there is work to be done and it’s 2:30, she isn’t leaving until the job is over.

“Some people don’t like the long hours, but it’s good for me because I have days off during the week, and I have a toddler at home,” Peters said. “I get to spend time with him during the week and don’t go a long time without seeing him.”

Ivey enjoys her schedule as well. She has a new grandchild living four hours away, so she can spend many of those seven days off to visit family.

Nurses can be seen as the lynchpin between patients and the doctor, as they spend the majority of the time with the person in the bed.

“Patient advocate is the way we describe it,” Ivey said.

The doctor is always in charge of the way the patient is cared for, and the nurses then carry out that action, Ivey said.

“We have great relationships with our doctors,” she said. “They are the same as us. They want the patient taken care of.”

Peters said the relationship between doctor and nurse develops over time. She said the doctors learn to trust the nurses and take suggestions from them medically because of the time they spend getting to know the patient’s tendencies.

Thrower said her goal is to make somebody happy or laugh when caring for them.

“I know they are hurting, but I want them to have a good day,” she said. “That is my goal.”

Peters said the job keeps her learning new things just about every day.

“When I come here, I learn something every day,” she said.

She said the job is never stagnant due to the continued education nurses need every two years, and several certifications they must keep up with to keep their license.

“It is evolving every day,” she said. “I love that part.”