Fairview Cemetery to be expanded 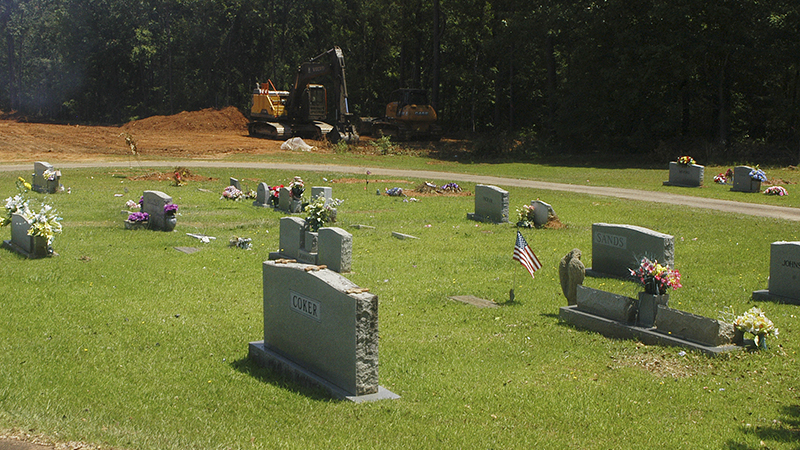 VALLEY — Fairview Cemetery is on the way to becoming the largest cemetery in the city of Valley.

It’s the one site in Valley where the city owns adjacent land for expansion. Clearing and grading on the site has taken place in recent days. Plans call for the existing cemetery to be enlarged with new roadways being built. At present, Fairview has about 1,100 grave sites. That can be expanded up to 3,000 sites.

“This is something we are going to do, but we are not in a hurry about it,” said Mayor Leonard Riley.

Cemetery expansion was a topic of discussion at Monday evening’s meeting of the Valley City Council. In addition to the Fairview site, the city also owns cemeteries at Bethlehem, Fairfax, Langdale, River View and Shawmut.

“Why not be in a hurry? People are just dying to get there,” joked Councilman Henry Cooper to a mixture of laughter and groans.

Public Works Director Patrick Bolt told the council that the really, really busy time of year had arrived for his department.

“We have seven mowers and three tractors to cut grass but rarely have them all in service at the same time,” he said.

“Some of them always seem to be down and undergoing repairs. We are patching potholes when we can. We’ve been in River View recently catching up on some needed work there. We are trying to catch complaints and address them as soon as we can.”

Councilwoman Cassie Carlisle thanked Bolt and the men in his department for the work done in River View.

“Citizens in my district want you to know they appreciate you pruning some trees that were hanging low next to some roads,” she said.

Councilman Jim Clark said that people in his district appreciated having a street sweeper running in the area on a regular basis.

Riley said that he had been privileged to have taken part in three really good programs over the last week.

On Wednesday, there was a groundbreaking ceremony for the new Four Star Freightliner business coming to town before the end of the year. On Friday, the city and the Valley Historic Preservation Commission co-hosted the dedication of a new park at the historic Bethlehem Cemetery, and on Monday, American Legion Post 67 hosted a Memorial Day program at Veterans Park in Langdale. Police Chief Tommy Weldon also said he wanted to get the word out about this year’s Junior Police Academy. It will start on Monday, June 17 and continuing throughout the week.

It’s popular with school-age children and concludes with a graduation ceremony in the big gym at the Community Center. Applications to participate are available at the front desk at Valley Community Center, at city hall and at Valley Police Department.