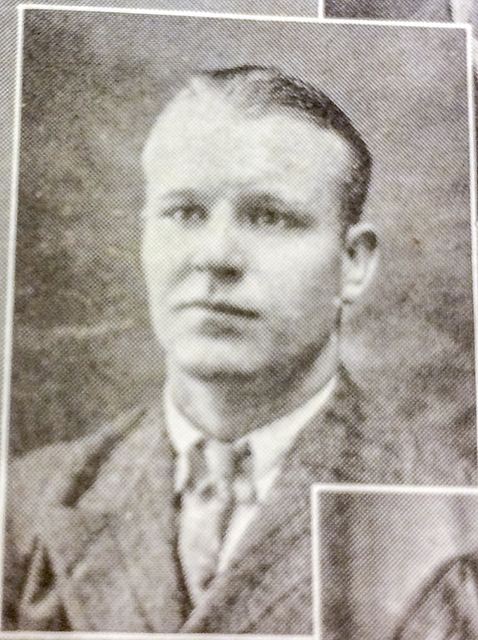 Pictured is a historical photo of former Lanett Police officer Ben McDonald who was shot and killed in the line of duty in 1936.

LANETT — A Lanett police officer who was killed in the line of duty in November 1936 is getting some recognition at the state and national level.

Officer Benjamin McDonald died from shotgun wounds received in a confrontation with two drunk and disorderly men late on a Sunday night in downtown Lanett.

This past Saturday, McDonald’s sacrifice was remembered in a ceremony conducted by the Alabama Chapter of Concerns of Police Survivors (COPS) in Anniston, and on Monday the Lanett City Council read a proclamation issued by Gov. Kay Ivey in memory of McDonald.

On the national level, McDonald’s name has been selected for inclusion on the National Law Enforcement Memorial in Washington, D.C. The names of 371 law enforcement officers who died in the line of duty are included on this memorial. This number includes 158 officers who died in 2018 along with 213 other officers, like McDonald, who died in previous years but whose story and sacrifice had been lost in history until now.

McDonald’s story was chronicled in The Chattahoochee Valley Times in the days leading up to Thanksgiving in 1936. Known to just about everyone around Lanett as Ben, McDonald had been a weekend officer in Lanett since 1936 and was being paid at a rate of $3.50 a day. On Nov. 2, 1936, he was promoted to the rank of a regular policeman making $100 a month. His duty as a full-time officer didn’t last long. On the night of Sunday, Nov. 15, McDonald and motorcycle patrolman Eddie Harris observed a car driving in a reckless fashion past the police station. The car made several trips around the police station, causing the two officers to make a traffic stop.

In relaying what happened to The Chattahoochee Valley Times, Lanett Mayor W.H. Knight said that Officer McDonald noticed the driver pointing a gun at him through a partly opened window. According to the mayor, the driver cursed the officer and told him “Hands up!”

“Officer McDonald threw his hands up,” said Mayor Knight, “and while in this position he was fired upon by (the passenger) who used an automatic shotgun. When Officer Harris attempted to interfere, (the passenger) fired another load at him, small portions of lead striking him on the face and leg.”

The driver of the car that night was G.M. Browning, a disgruntled former police chief in Lanett. He had been chief from Aug. 1, 1933, until being relieved of his commission on March 1, 1936, for disorderly conduct. The passenger was J.L. Smallwood, whose brother, Guy, had been on the Lanett police force at one time.

The two wounded officers were taken to the hospital in the Langdale community.

Within two hours of the shooting, Lanett Police Chief Larry Avera and other officers went to the homes of the two subjects and arrested them without incident. Browning was taken to the Lee County jail in Opelika and Smallwood to the Chambers County jail in LaFayette.

Harris received some wounds to his face and leg. Fortunately, they were relatively minor, so much so that he was able to return the work the following day. It was a different story for McDonald, who had 17 shotgun pellets in his abdomen. He succumbed to those wounds the following Saturday.

At the time of the shooting, McDonald had a young daughter named Patricia. She’s now 85 years old and lives in South Carolina. She has been informed of her father being honored by the state of Alabama and the U.S. for losing his life while protecting and serving the citizens of Lanett so many years ago.