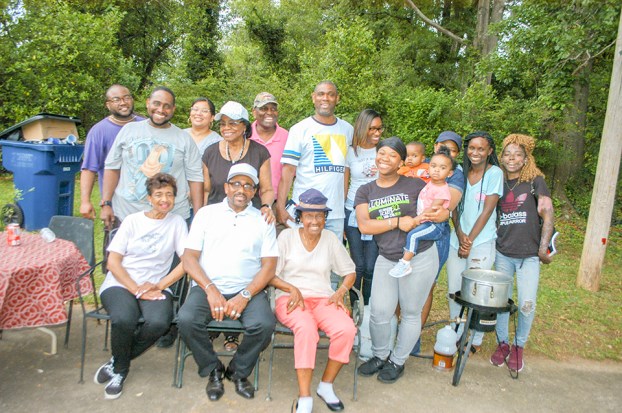 LANETT — There was an unusual Mother’s Day weekend family get together on North 6th Avenue in Lanett Saturday afternoon.

Children, grandchildren, great-grandchildren (and even some great-great-grandchildren) gathered at the home of the late Izzella Brooks Fielder for a backyard barbecue, smooth music and just a good time with extended family. A much-beloved matriarch of the family — Mrs. Fielder was known to almost everyone as Mama T died in 2003.

Organized by Jerome Johnson Jr. and Tonya Bradshaw, Mother’s Day weekend at Mama T’s house attracted family members from across the two-state area, the Carolinas and as far away as Ohio.

“She was such a good person,” Daughter Julia Harmon said. “She opened her home to everyone and made them feel welcome. She raised six children. Three of them have passed.”

Julia lives in the Lanett area. Her husband, the late York Harmon, ran a body shop on Highway 50 in Lanett. The other surviving children are Georgia Bradshaw, who lives in the Atlanta area, and Henry Brooks, a retired auto worker who lives in the Toledo, Ohio, area. The three children who have passed are Robert L. Brooks, who died in the 1960s, John L. Brooks, who was living in Detroit when he died in 1992, and Charlie Brooks who was living in the Atlanta area when he died in 2012.

For many years, Mrs. Fielder didn’t have to invite family to her home on Mother’s Day weekend. They knew to be there. It was the place to be to show Mama T love, to enjoy each other’s company and to have good food. A godly woman, Mrs. Fielder was quite proud of her grandsons who became ministers. Rev. C.L. Hutchinson lives in the Atlanta area and Rev. Jack Wilson is in Columbia, South Carolina.

The delicious smell of barbecue that wafted throughout north Lanett on Saturday was coming from the backyard at Mama T’s home. There was also some memories music from the likes of such recording stars of the 1960s, 70s and 80s such as Marvin Gaye, Earth, Wind and Fire and Michael Jackson. There was a lot of catching up to do from family members who don’t see each other as often as they’d like to.

“We’d talked about having a special reunion this year,” Harmon said. “We thought of a number of places to do it, but it just didn’t seem right to do it anywhere else but here.”

Henry Brooks, who made the trip down from Ohio, said it was good to be back home and be with family again. He’s been retired for 15 years now. Having grown up in the South, he’s never gotten used to those cold winters up north.

“We had a cold winter this year,” he said. “But thankfully, we didn’t get as much snow and ice as we have in some years.”

Harmon began her day by carrying some flowers out to her mother’s grave in the church cemetery at St. John’s Community Baptist, not far from West Point Dam.

“She loved that church,” she said. “She sang in the choir.”

The original church had to move because of the West Point Dam project. Part of the church moved to Cherry Drive in Lanett with a country church being built near the dam. Mama T worshipped at the Lanett church not far from her home.

Her second husband, Edward Fielder, lived well into his 90s and was active late in life. He worked for many years for the West Point Wholesale Grocery.

“We’d love to do something like this again someday,” Harmon said. “It takes a lot of planning and getting in touch with a lot of people.”