Funeral set for Valley native and “Voice of the Tigers” 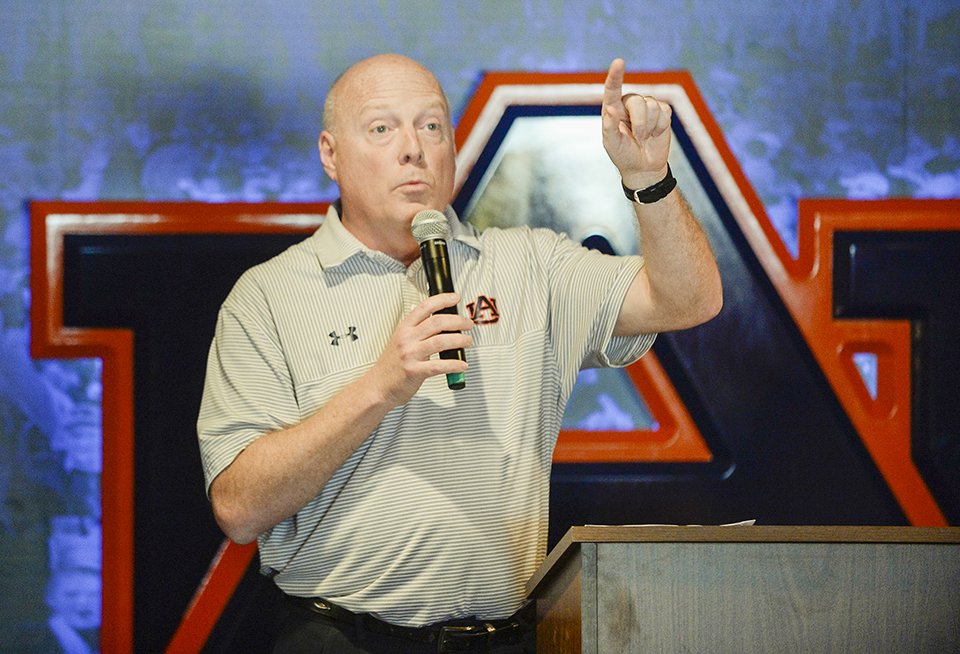 AUBURN — A public memorial service will be held inside Auburn Arena at 2 p.m. CDT (3 ET) this Thursday for Rod and Paula Bramblett, who died Saturday from injuries suffered in a two-vehicle accident in Auburn.

Rod Bramblett, 53, was widely known as the voice of the Auburn Tigers. He was a 1984 graduate of Valley High School and a 1988 graduate of Auburn University. His wife, Paula, grew up in the Huguley community and also attended Valley High in the 1980s. Rod’s mother, Vickie Lynn, is a retired educator, having spent a number of years as an administrator with the Chambers County School District. She lives in the Todd Addition neighborhood in Shawmut.

Valley Mayor Leonard Riley, who was Rod’s principal in high school, remembers him as a well-mannered and dependable student.

“He was the type of student who always did what he was asked to do,” he said. “I never remember him getting into any kind of trouble.”

The mayor credits that to him having a very good home life while growing up.

Bramblett’s broadcasting career also has local origins. While in college, he worked part time at WZZZ/WCJM in downtown West Point. He went on to work at WAUD in Auburn in 1989-1991 and from 1993-96. He did play-by-play for Lee-Scott Academy and Auburn High athletics during this period. He started calling Auburn University baseball games in 1993 and became the overall play-by-play announcer ten years later.

After 27 years behind the microphone at sporting events throughout the U.S., Bramblett called his last game this past Thursday at the SEC baseball tournament.

The fatal accident took place at approximately 6 p.m. CDT Saturday afternoon at the intersection of West Samford Avenue and the Shug Jordan Parkway. According to police reports, the Brambletts were in a 2017 Toyota Highlander and were struck by a 2011 Grand Cherokee driven by a 16-year-old driver. Mrs. Bramblett received internal injuries in the collision and was rushed to the East Alabama Medical Center emergency room, where she died from those injuries. Sustaining head injuries in the crash, Rod was airlifted to UAB in Birmingham, where he passed away.

The driver of the other car was hospitalized with serious injuries.

The last coach he interviewed, baseball coach Butch Thompson, was heartbroken by the news.

“I was proud to call Rod and Paula my friends,” he said. “What I think of most is that Rod was often proud to say he was from Valley, Alabama. He often spoke with pride of his loving wife and amazing children.”

“I’m heartbroken by the loss of Rod Bramblett and his wife Paula,” said Auburn coach Gus Malzahn. “Rod was a true professional and was always a pleasure to work with. He loved Auburn and it showed through his work. As much as he loved Auburn, his family came first and foremost. This is a difficult time, and we will continue to pray and offer our support for the Bramblett family, especially their children Shelby and Joshua.”

Bramblett became Auburn’s play-by-play announcer under difficult circumstances in 2003. He succeeded Auburn legend Jim Fyffe after Fyfee had died of a brain aneurism at age 57. Auburn fans had to wait three games to see if he would carry on with Fyffe’s “Touchdown Auburn!” call. They didn’t score one in the first two games versus Southern Cal and Georgia Tech but in the third game versus Vanderbilt he called it in a way that would have made Fyffe proud.

Bramblett is famed for his “Go crazy, Cadillac!” call after Carnell Williams scored on an 80-yard run to open the 2003 Iron Bowl game.

Other highlight moments include the 2004 perfect season, the 2010 national championship season and the recent NCAA tournament run by Bruce Pearl’s basketball team. His calls of “Night! Night!” to get across that the big games against Kansas, North Carolina and Kentucky had been decided by Bryce Brown, Jared Harper, Chuma Okeke and company won’t be forgotten by Auburn fans.

Arguably his greatest call, though, was the Kick Six play against Alabama in 2013. Bramblett’s description was replayed nationally for weeks after it happened and played a big part in him being named the nation’s best sportscaster by Sports Illustrated.

“It was 10 seconds of play-by-play perfection as he called one of the most incredible plays in college football history,” wrote Barrett Sallee of CBS Sports. “It was total professionalism from Bramblett, unrestrained joy for the program he loved at a moment of extreme chaos for which no one in the radio business could have ever prepared.”

“Bramblett was given two once-in-a-lifetime plays this year, and he delivered on both,” Sports Illustrated reported on naming him their sportscaster of the year for 2013. “Though the call of Chris Davis’ 109-yard dash in the Iron Bowl will be played for eternity, even better was his description of Ricardo Louis’ 73-yard catch of a tipped ball that gave the Tigers a 43-38 win over Georgia on Nov. 16: ‘A miracle at Jordan-Hare! A miracle at Jordan-Hare!”