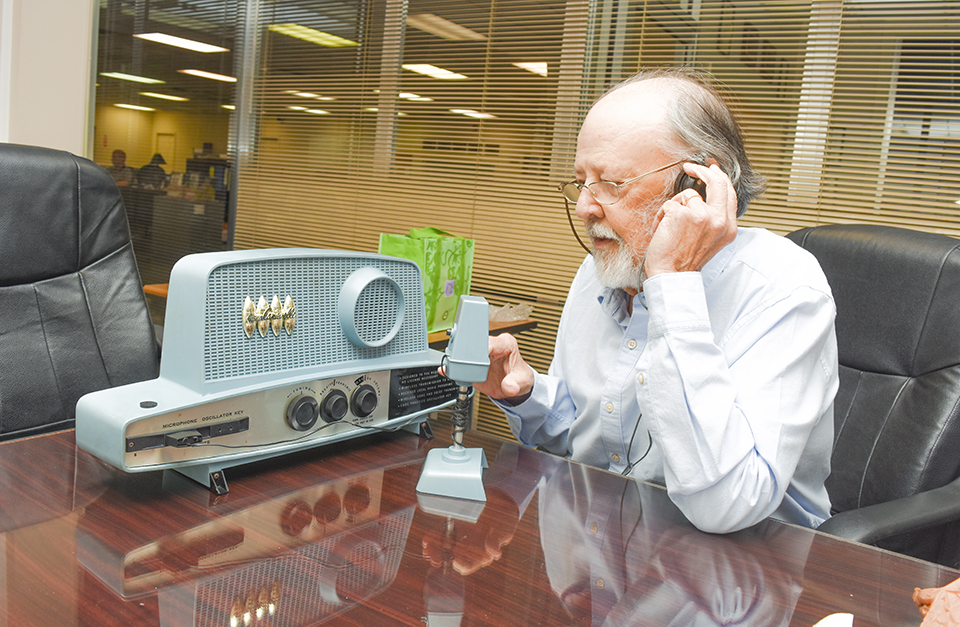 John Long, CEO of the Georgia Radio Hall of Fame, demonstrates how a Caravelle radio transmitter and receiver worked. The hall of fame includes more than 300 antique radios.

The Georgia Radio Museum and Hall of Fame has found a home in LaGrange.

The museum will be located at 716 Lincoln Street in the Hillside Community. Since December, the exhibit has been on display at the Legacy Museum at the Troup County Archives building, and that display will continue until June 15.

The new location in Hillside is expected to be up and running by July.

Finding a location is the end of a long search for CEO and co-founder John Long. He’s still hoping to find a more permanent location, one where a business or local organization might want to take over the hall, but he’s glad to have a place in Hillside.

“I believe it can last. At least it has a foothold now, at least it has a little bit of an anchor,” said John Long, CEO and co-founder of the museum. “I keep working and hoping that somewhere in Troup County there’s a place where the Georgia Radio Hall of Fame can live for prosperity.”

The hall first opened in 2007 and the museum opened in 2014 in St. Mary’s, Georgia, a city just north of the Florida line. Long and his wife, Patti, moved to LaGrange in 2018. Long is a LaGrange native and decided to move back home last year.

The museum includes dioramas of a 1950 radio studio, books about early radio engineering, an interactive Wall of Fame with the names of inductees into the Georgia Radio Hall of Fame and more than 300 antique radios.

Long said he was thankful to Joey Thompson, who is renting the building at a low fee to the hall of fame.

“Rather than just give up and have to liquidate a huge storage room full of storage space, including more than 300 antique radios, I decided and our board decided to go ahead and bite the bullet on the expense of keeping the exhibit going,” Long said. “[Our hope is] that in the future an organization or business might come forward and want to have this exhibit as part of what they do.”

The Georgia Radio Hall of Fame has more than 800 members in the world and nationwide, according to Long.

He said the hope is that through admission fees, the museum can pay its rent each month.

Official hours have not been announced, but Long said he plans to be open on weekends and to open up the museum for large groups during the week.

He also said he’s in need of volunteers. For anyone interested, Long can be reached at grmhof@gmail.com.

The Georgia Radio Hall of Fame Induction Awards will be held Oct. 26 at Great Wolf Lodge’s conference center. This will be the second consecutive year that the awards ceremony has been held in LaGrange.

For more information on the Georgia Radio Hall of Fame, visit Grhof.com.