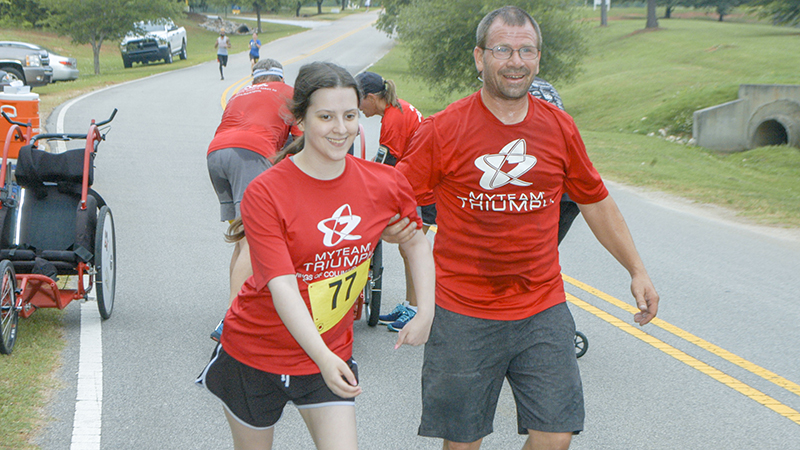 Mary Kinsman was all smiles following her ride in Saturday’s 5K event in the Hike/Bike/Run. Mary is 17 years old and has had cerebral palsy since she was a young child. She’s able to participate in events such as 5K runs through assistance provided by the Columbus, Georgia chapter of My Team Triumph, which pairs able-bodied volunteers with someone with a disability, allowing them to have the excitement of participating in an event they’d otherwise be unable to take part in. --Wayne Clark

VALLEY — For the 30th year in a row, the Hike/Bike/Run fundraiser for Valley Haven School has passed the $100,000 mark.

“We are well pleased that the community came through for us this year,” said Executive Director Craig Brown. “This was a difficult year with people being asked to give. We had a devastating tornado on March 3, and many people in the Valley and Chambers County have given to help them, and that’s a good thing.”

Thus far, the fundraising total for Valley Haven has exceeded $108,000, and it should go up some from there. Some pledges have yet to come in, and there’s a bowling tournament and bingo at Valley Bowl this evening.

The weather conditions were ideal to hike, ride a bike or run on Saturday morning. It was cloudy and cool and the rain that was in the forecast didn’t come in until late in the day.

Approximately 30 runners took part in the 8:25 a.m. 5K race. It’s an event in the Run and See Georgia Grand Prix, and a number of runners from the state of Georgia were there to take part in it and earn points that could qualify them for the championship round.

Two young women with disabilities were able to take part in the race thanks to the Columbus chapter of My Team Triumph. Mary Kinsman, 17, and Julianna Russell, 25, both finished the race thanks to Team Triumph “angels” taking turns pushing them in specially designed wheeled chairs. Mary has had cerebral palsy since she was very young. Her twin sister, Emily, is a senior at Smiths Station High this year.

“She is very excited to be here today,” said her mother, Terri Russell. “She will be in the bike race, too.”

My Team Triumph angels assisted both Mary and Julianna in completing the 10-mile course.

The 5K and 10.5K races ran on different courses this year. With the goal being to get the runners off Fob James Drive and Fairfax Bypass, the races started on Ram Stadium Drive near the intersection of Fairfax Bypass. The course went to the junction of Sonny Crim Drive, where it took a right and went to Sportsplex Drive, where it took a left back to the Sportsplex parking lot. The route then looped through the Valley Industrial Park back to the point of origin.

Two of the better runners in the local area, Montray Thompson and Dr. Phil Tranquil, finished first and second in the 5K.

Thompson is the Child Nutrition Program director for the Chambers County School District. Dr. Tranqui is a local surgeon.

When asked if it was hard to stay ahead of Dr. Tranqui, Thompson replied, “Oh, gosh, yes. He redefines who Dr. Phil is, and he ain’t that guy on TV.”