Historic April flood repairs being made 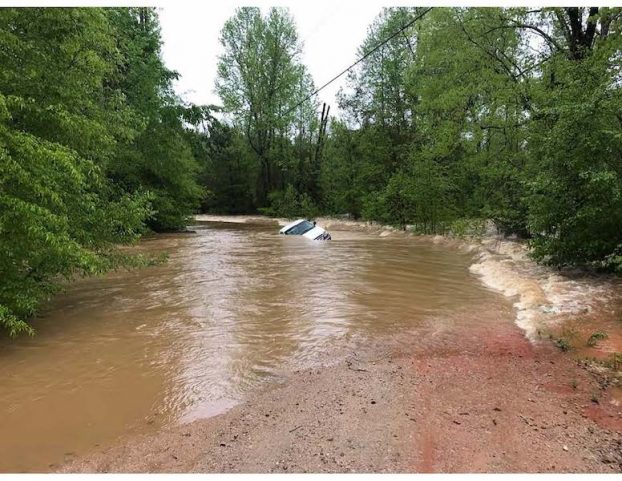 The Troup County Board of Commissioners listened to updates on the April 19 flooding that took place across the county, which was the flood of record in specific locations. - Contributed

By Alicia. B. Hill
Times-News

In many parts of Troup County, the damage from the April 19 flooding can still be seen. Many homes and roads flooded as a result of an abundance of overnight rain, and now the county is in the process of restoring those roads damaged by flooding.

During the flood, 28 county roads flooded, 13 of which were damaged. Some of the damage was relatively easy to repair, such as four roads that had trees down. However, other roads saw major soil erosion, a damaged drainage structure or a complete road failure.

“In the southeast part of the county, I think we’ve never seen rain like that,” County Engineer James Emery said. “There were some places where you would call it the flood of record for that particular structure.”

Wright Road (between 535 and 545), Bill Taylor Road at Ingram Creek (between 505 and 646), South Thompson Road at Polecat Creek Bridge (between 1651 and 1668) and Cook Road (between Frost School Road and 763 Cook Road) all suffered total failures — where the road becomes impassible without major repairs — during the flood. The Troup County Board of Commissioners received an update on those roads and others on Thursday during its regular work session.

“Of these four total failures, we’ve had assistance from Georgia DOT on the design of the replacement structures, and we greatly appreciate that,” Emery said. “The design is complete and approved by Troup County on three of the four. The fourth we expect to have Troup County’s approval of hopefully today [Thursday].”

Emery noted that past weather events where the county saw flooding had impacted different parts of the county. He said flooding in May 2003 impacted bridges, while the September 2009 flood is considered the flood of record for the state — though it caused almost no damage in Troup County — and flooding in December 2015 flood damaged smaller drainage structures.

“None of the structures that we replaced in ’15 had total failures,” Emery said. “There is one that had significant erosion, and that was at Flat Shoals Church Road. That was also a structure that was not a total failure in ’15 [either], but it had major erosion [at that time].”

The damage was repaired after the December 2015 flood, and that section of Flat Shoals Church Road was brought up to newer standards. Emery said the damage during the April flood was the result of blockage.

“It wasn’t a total failure. It was just erosion on the downstream side because it was stopped up with all kinds of debris, including children’s playground toys, four-wheelers even clogged up against the double 48-inch pipe that couldn’t pass through,” Emery said. “So, we had to repair that road.”

“I know a number of people say they had six-inch rain gauges, and they were overflowing,” Commissioner Ellis Cadenhead said. “Mine was electronic, and I showed 7.48 [inches].”

Commissioner Richard English asked about the state and capacity of the pipes before the flood, and Emery said that they had been reviewed. However, he said that sometimes flooding can sometimes cause major damage in otherwise adequate drainage structures, if even minor damage is present.

“Sometimes that [minor damage to pipes] doesn’t show up in inspections,” Emery said. “It shows up when you have a flood like this and the entire structure gets washed out. I thank God that no one was injured or killed in this flood. They could have been.”

Emery said the total cost of repairs was still under review as of Thursday. However, the repairs may be eligible for emergency funding.

The board of commissioners plans to acknowledge the work done by county employees in response to flooding last month.

The Troup County Board of Commissioners will meet again on Tuesday at 9 a.m. at 100 Ridley Avenue.