Lanett athletics wrap up another year with awards banquet 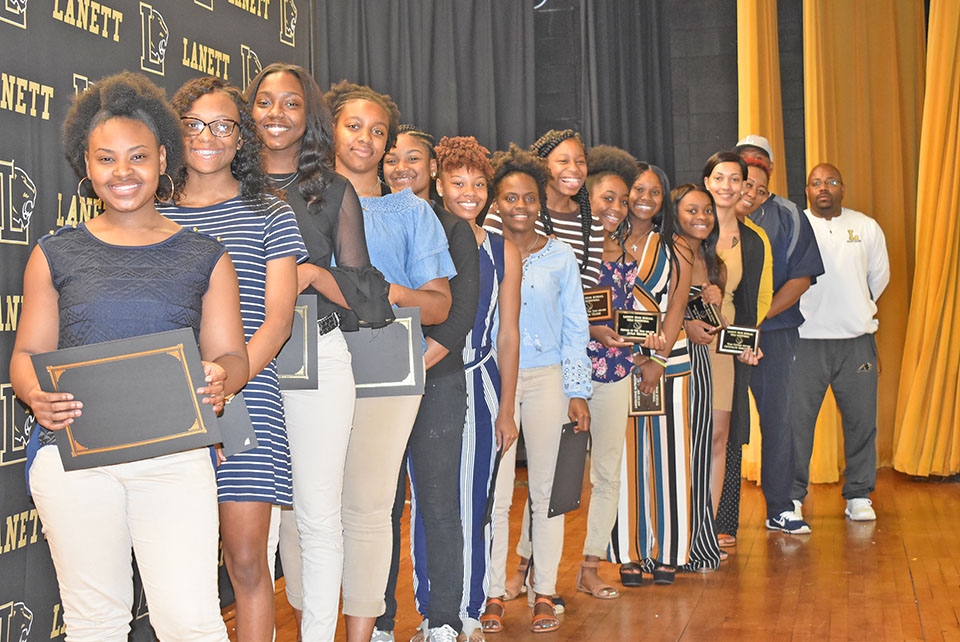 ONE TEAM: The Lanett girls basketball team lines up for a picture at this year’s athletic banquet. Photo by Rashad Milligan

LANETT —The theme of this year’s Lanett High School athletic banquet was a bit different.

While awards were still presented to athletes on each team, and the student-athletes and coaches enjoyed each others company one last time for the school year, there was still a slight difference in the atmosphere compared to last year’s event.

“I’m going to be totally honest,” Lanett athletic director Clifford Story, Jr. said, “we did not achieve what we set out to achieve. The football and volleyball programs start off the seasons, and unfortunately, we weren’t able to accomplish our goals. We have just gotten spoiled. What we want to accomplish and get are those blue trophies every year. The guys were upset, which was good for me, they’ve really changed their whole mindset and demeanor on doing things differently because they know where we fell short, and we’re going to fix it.”

Despite admitting some disappointment from not repeating in football state championships this year, Story still had a wider perspective of the school’s athletic success.

“Lanett athletics is in a great position,” he said. “We’re always going to have special athletes, special talent, be able to win a lot of games as we move forward. We’ve got a great group of coaches, a great group of coaches, great staff and administration give us whatever we need, whatever we want. That means a lot to our athletic program, and it’s been a fun ride this year, but it’s time to put our cleats in the ground and go back to work.”

Boys head basketball coach Richard Carter opened his presentation of team awards by apologizing for falling short of the team’s goal of winning a fourth state championship in a row this past season, and guaranteed that the team will do whatever they can to make it back for his final season next year.

“We’re still ‘Champ High,’” Story said. “I told them that ‘hey, we didn’t get it, but how many schools can say that they’ve won seven championships in the last 10 years at a 1 and 2A program?’”

The event was the final time the seniors would be honored as student-athletes for the Panthers.

“Great group,” Story said. “Majority of those guys were a part of everything that we’ve accomplished here, they came in as young kids, did what we asked them to do and worked extremely hard. They’re going to be missed. You have a guy like Trikweze who tied the state record for interceptions, who’s just one of those model kids. He doesn’t get in trouble, he makes good grades, he’s what you want to be a part of your family. Dobbs, who’s my nephew, I saw him grow up as a little kid. Now, he’s going to be able to go out into the real world now in college and perform at that level. D’Terrion Glaze, who was a three-time All-State kid. We’ve had a great group of seniors, Kane, Kolby, I can go on and name them, but they did what we asked them to do, and I couldn’t be more proud of our seniors.”

Story encouraged the seniors who are graduating this Friday to remember to keep God first and make their own paths.

Valley shut out in jamboree at Opelika