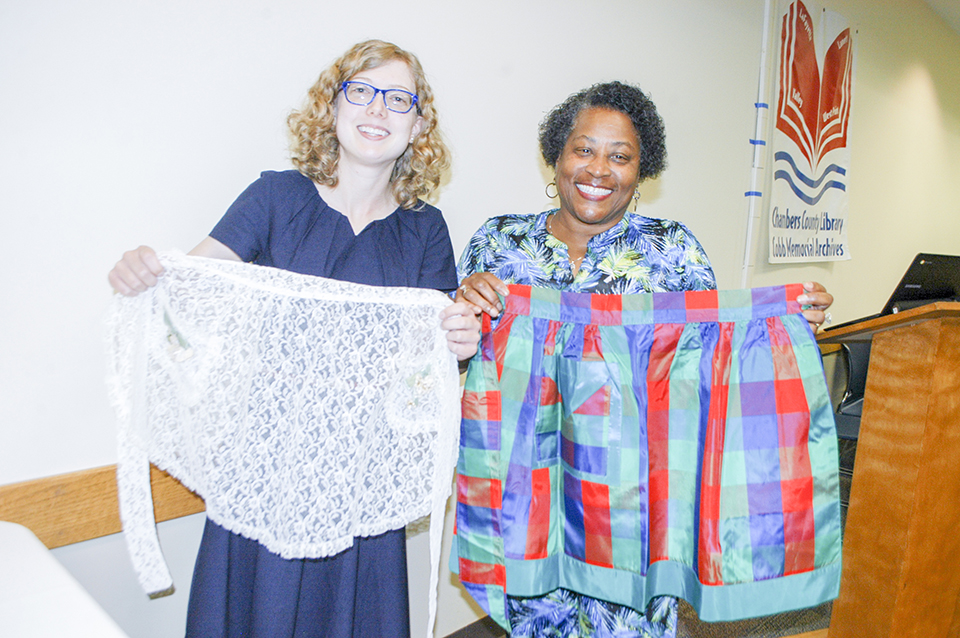 They were Virginia “Jennie” Atkinson (1861-1941), a missionary who was much beloved by the people whose lives she touched in China; Tomasine “Tommie” Cobb McGehee (1888-1983), a woman’s suffrage advocate, who lived in LaFayette for a period while working for women’s right to vote; and Mamie Inez Allen Nolan (1890-1974), a teacher, administrator, church and community leader in LaFayette, who persevered against funding shortages to teach generations of African-American children valuable skills needed for a better life.

Atkinson was born in Talbotton, Georgia, the year the Civil War started. Her father was a popular Baptist minister and temperance lecturer. Finding himself widowed with small children to raise, the Rev. Atkinson sent Jennie at age 8 to live with a relative in Rock Mills. According to her friend and biographer Mary Culler White, Jennie felt abandoned there, and feelings of insecurity would follow her. Timid and reserved, but studious, Jennie did well at the Rock Mills Academy and went on to study at the LaGrange Female Academy, which is now LaGrange College. In just two years, she graduated as the school’s valedictorian and returned to Rock Mills to teach.

“Her life changed when she was 22,” Brown said. “In 1884, she read in a Methodist newspaper an announcement about a need for missionaries. Something stirred her heart and before the year was out Jennie was a missionary with the Methodist Episcopal Church South and sailing across the Pacific Ocean on a boat bound for China.”

She would spend an amazing 56 years working as a missionary in that Far East country. “Jennie found her own way to study the language,” Brown said. “She realized that spoken Chinese had a kind of rhythm to it. She would learn words by moving her foot to the rhythm.”

At age 68, Atkinson contracted typhus. She was far away from medical help and almost died. She survived, though, and two years later her former students arranged for an elaborate ceremony to celebrate her life’s work and what she meant to them.

“Jennie had found a home in China, and she found family in her students,” Brown said.

The grateful citizens built a home for her in 1934, but she didn’t have long to enjoy it. Three years later, in 1937, Japan invaded China, including the portion of the country where Jennie lived. She had to flee her home for a time and managed to escape violence. In 1940, she was advised to leave China and return to the U.S. Her health was declining at the time, and she reluctantly agreed to go, but with the promise she’d return when her health improved. She died on Dec. 12, 1941, only five days following the Japanese attack on Pearl Harbor, an event that brought the U.S. into a war in the Far East.

“Tommie” Cobb was teaching music in Selma when she was inspired by the woman’s suffrage movement in 1913. At the time, she was the music supervisor for the Selma City Schools. At around 1915 or 1916, she married Edward McGehee, who was the principal of Selma High School. They moved to New York City, where her husband studied at Columbia University. In 1917, they returned to Alabama following Edward’s acceptance of a position as superintendent of LaFayette City Schools.

“I think it’s worth noting that Tommie McGehee lived in Selma as the women of that city organized for the vote,” Brown said. “She brought those ideas with her.”

She worked with Mary Andrews, president of the LaFayette Equal Suffrage Association. “The Chambers County women gained momentum as did the movement,” Brown said. “Soon, they had reason to celebrate. On June 4, 1919, Congress passed the 19th Amendment, granting women the right to vote.”

The bill became law on Aug. 26, 1920, when it was ratified by a sufficient number of states.

That first year, Chambers County had 1,098 women registered to vote.

In 1920, a League of Women Voters organized in LaFayette. Their first course of action was to rally support around a proposed bill for prenatal health and infant welfare. The bill passed in 1921.

“Both Mr. and Mrs. McGehee were dedicated to education, for both whites and African Americans,” Brown said. “Not everyone, however, held such progressive views for the time. During this period, African Americans were still fighting to attain access to education. African American education was critically underfunded, especially in the South, where schools received scant support.”

Private funding, usually from Northern-based entities, was put to good work in Alabama. One such organization, the Anna T. Jeanes Foundation, sought to improve education for rural African American schools.

“Money from this fund was used to hire Mrs. Mamie Nolan,” Brown said. “She had started teaching in 1908 in the Sugar Town neighborhood in Phenix City. She came to the profession naturally as her father had worked for years as a school teacher in Lee County. Although born into slavery, her father had learned to read and write at an early age. Mrs. Nolan learned from him that education meant opportunity.”

“She advocated for her rural schools,” Brown said. “She was able to acquire books and distribute them to rural schools under her charge.”

Mrs. Nolan cared deeply about her community, especially for girls.

“Her home was a haven for troubled and homeless girls,” Brown said. “She was kind, but strict, with days beginning at 5 a.m. and ending at 8 p.m. She impacted biblical wisdom to those under her care. She was the founding mother of Nichols’ Chapel AME Church in LaFayette. The church has celebrated “Mamie Nolan Day” in honor of the work she did to help form the church.”

One of the girls Mamie Nolan worked with was present for the Lunch N Learn program and talked about the kind of influence she had. Ocie Turner is 89 years old and considers her one of the most important people she ever knew.

“That woman was a godmother to me,” she said. “She was awesome. She could keep kids out of trouble and have them doing productive things.”