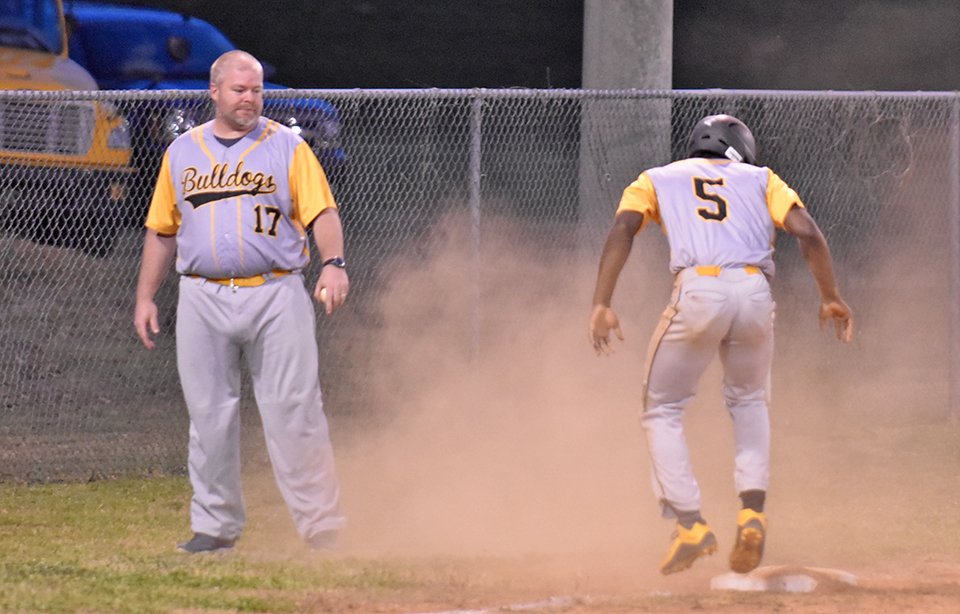 LOOKING ON: Micheal Pattillo, pictured left, recently resigned from his position as the head baseball coach of LaFayette High School. Pattillo will remain at the school as a junior high P.E. teacher and football assistant coach. Photo by Rashad Milligan

LaFAYETTE — The LaFayette baseball team will head into a new era next season as eight-year head coach veteran Micheal Pattillo recently announced his resignation from the position earlier this week. Pattillo plans to remain at the school as a junior high physical education teacher and an assistant on the varsity football staff.

“I’ve had a great last eight years as far as being the coach,” Pattillo said. “The kids have been great. We’ve had our ups and downs as far as seasons have been, but the kids have always done everything they could do to get in there and get better. At this time I felt like I needed to step away from that part of it and spend a little more time to focus on my family.”

Pattillo has a wife and two young children who are growing into the ages where they can participate in their own extracurricular activities now. Pattillo said that he coached his son’s T-Ball team a couple of years ago.

“They’re getting to that stage where he’s about to be in middle school and he’ll be able to play ball for the school real soon,” Pattillo said. “Hopefully, I’ll be able to enjoy being able to watch him and possibly coach him later on.”

The coach went on to thank the LaFayette community.

“I appreciate what everyone has done in the past few years as far as supporting the team over the time that I’ve had it,” Pattillo said. “I hope they will continue to support them as they move forward with whoever comes in and takes over the program and keeps trying to get it where it needs to be. Continue to grow and build the legacy that LaFayette is trying to build as far as all of their athletic sports, not just one or the other.”

On the field since 2014, the Bulldogs have gone 21-46 and haven’t made the playoffs in Pattillo’s eight seasons at the helm, but the coach said his team’s records did not factor into this week’s decision.

“Those kids, no matter if we had a lot of wins or not a lot of wins, they were always doing were asked to do,” he said. “They were trying to make sure they got better, so that didn’t have anything to do with it whatsoever.”

The baseball program at the school has come a long way since Pattillo has taken the reigns. He said that thanks to the Superintendent, the Bulldogs’ home field was able to get some grass in the infield and a new sign that reads “Home of the LaFayette High School Bulldogs.”

“I was always taught growing up that when you take over or doing something, you always want to leave it in better shape than you found it,” Pattillo said. “I hope that everyone would see that we tried to do everything that we could that it was in better shape than when we found it.”

At LaFayette’s athletic banquet this past Tuesday night, Pattillo presented awards for softball and baseball teams because head softball coach Mary Daves was grieving over the recent loss of her father.

At the end of his baseball awards, he called up seniors Trevor Vines, Nicholas Beaty, Mekevion Shealey and Markavious Tolbert to the front to give them baseballs as a go-away gift.

“They mean a lot to me because I’ve been at LaFayette for 12 years, so those kids were first-graders when I got them,” Pattillo said. “I’ve watched them grow from being five, six or seven-years-old to being able to graduate. I think most of them are going to be able to, if not play at the next level, continue their education and possibly get a college degree. Everyone that was there, they’ve been with me the entire time, from junior high all the way through playing baseball.”

On the football field, Pattillo said that he’s focused mostly on coaching the offensive and defensive linemen in recent seasons. In his primary focus of baseball, however, his hopes for the next coach are simple.

“I’m hoping that whoever comes in next takes what we’ve started, build on that and will hopefully be able to take them to the next level, which would be to get them in the playoffs,” Pattillo said. “One thing that we were not able to do while I was there was to get them in the playoffs even though we tried as hard as we could. [I want the next coach] to keep getting those kids to come in and focus every day. Keep working hard so they can reach that ultimate goal of making it into the playoffs.”

On Thursday night, LaFayette athletic director James Lucas said that the school “will probably” promote one of the coaches on the who are already on the baseball staff into the lead role, and that the announcement will be made by May 15.