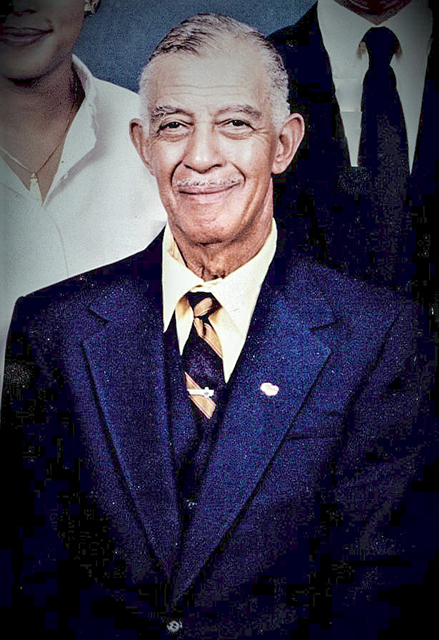 Mr. Barber was preceded in death by his wife of 79 years, Rosie Lee Lockhart Barber, and his grandson, William Jeremy Barber.

Cleve Barber came from a family of six boys and one girl, Cleve being the third child.  They all lived in a community just outside of West Point, known as Barberville.

A Georgia farmer and landowner, Cleve Barber Sr., followed in the footsteps of his parents, George Barber Sr. and Cora Barber, both released indentured servants and first-generation descendants of slaves.  Although successful as an agriculturalist, Cleve Barber Sr. was drawn to and into the field of mechanics by Mr. Lee Ennis, a businessman and salvage company owner.  A short time later, he joined the Huguley­-Scott Ford Motor Company earning a higher wage to support a growing family.  It was not until 1948 that his career took a leap that would change is life forever.  On Feb. 7, 1948, Cleve Barber Sr. joined the Skinner Corporation as the company’s first full­-time mechanic.  It was there that he met his lifelong friend and employer, Mr. O.G. Skinner, founder and CEO of the organization.  It was during this time that Mr. Skinner proclaimed “for as long as I have bread, you will have bread.” It was only three years after World War II, and trucks and heavy machinery were still in short supply.  With the backing of his employer, Mr. Barber along with his colleagues rebuilt and maintained a fleet of vehicles catapulting that side of the business to great heights of success.  Mr. Cleve even repurposed old army jeeps to help fill the gaps.  Cleve Barber became the maintenance manager for the very fleet that he helped to build and at his retirement was described as a beloved institution in the Skinner organization. The two families remain close as new friendships flourish, all started by these two great men.  Mr. Cleve Barber Sr. is a true manifestation of the “American Dream.”

Cleve was a very gentle, kind, calm, easy­going Christian gentleman of great faith. His philosophy was “to treat people right, and they will treat you right” or “do unto others as you would have them do unto you.” He joined the church in 1936. He later helped in the building of a Sunday school and church.  He served as officer, president of the Usher Board, treasurer and chairman of the board of deacons of the Mt. Nebo Baptist Church. In 1950, he joined the Masonic Lodge of Pine Mountain, Georgia. He also served as the president of the Benevolent Lodge.

Funeral services will be held on Saturday, May 11, 2019, at 11 a.m. ET at the Bethlehem Baptist Church in West Point with interment following in Marseilles Cemetery.  The Rev. Willie J. Barber II will be officiating the service.  Mr. Barber’s family will be receiving friends at the Johnson Brown-­Service Funeral Home in Lanett on Friday evening from 6 until 8 p.m. ET.

The family requests that standing flower arrangements be sent or that donations be made to The Alzheimer’s Association, www.alz.org, PO Box 96011, Washington, DC, 20090 in his memory.

Please visit our website at www.johnsonbrownservicefh.com to leave a condolence for the family, to share a memory of Mr. Barber or to light a Remembrance Candle in his memory.