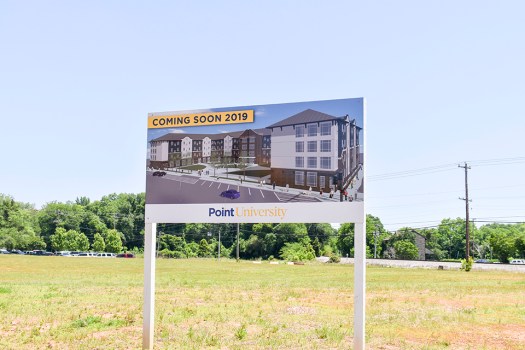 Point University is hoping to build a new dorm building at the intersection of West 3rd Avenue and West 8th Street in West Point. — Dustin Duncan 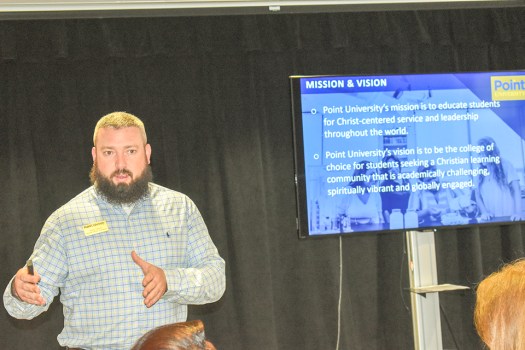 On Wednesday during a Lunch and Learn meeting hosted by the Greater Valley Area Chamber of Commerce at Point University, Hassell said there were about 600 undergraduate students in the West Point area this past fall.

The college moved to West Point in June 2012 from East Point, and Hassell said he was excited because he could tell people there were more than 20 programs were students to obtain a degree.

“This fall, we will have over 80 programs,” he said. “In seven years, that’s quite an addition.”

The student population had trended the same way as the number of degrees offered, which was a bit of a surprise when Point first made its move to West Georgia.

“When we were making the move down here from East Point, the expectation was that we would see a decrease in enrollment, or may have a plateau, but that number has shot up,” Hassell said.

To accommodate the increase in students, Point University is working to secure funding for a new dorm building at the intersection of West 9th Street and West 3rd Avenue in West Point. A sign is staked into the ground at the site, saying the building could break ground in 2019. Hassell said Wednesday that financing for the new building is still in the air.

Hassell also said Point is made up of students from several backgrounds, including different Christian traditions, various social, racial and economic makeups.

“We are not your traditional Bible College anymore,” he said. “We have students from a variety of backgrounds.”

As for many of its degree offerings, Hassell said the university likes to use the term “pracademics,” a practical application of academics.

“We don’t believe a student sitting in a seat for four years, reading a bunch of textbooks and taking a bunch of tests, and then sending them into the world that they will be ready for their career,” he said.

Hassell said many of the students get hands-on, real-life training within the degree programs, and develop their resume and portfolio when they are a student, so they are prepared after graduation.

Hassell said there are several athletic opportunities for the student at Point University as well. There are about 450 student-athletes within the institution, which makes up about 70 percent of its student body. He said they are all on some form of a scholarship.