Tire manufacturer project is on indefinite hold in LaGrange 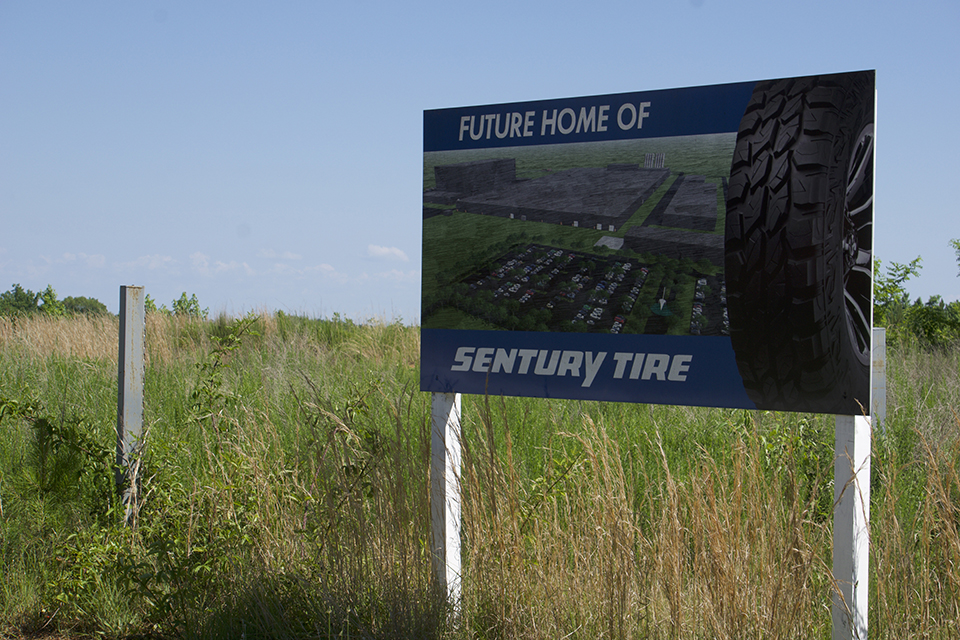 By Alicia B. HIll
Times-News

On Wednesday, the Downtown LaGrange Development Authority confirmed that construction of Sentury Tire USA’s Troup County facility has been placed on hold indefinitely.

In September 2016, Gov. Nathan Deal announced that Sentury Tire was planning to invest $530 million in a car and light truck tire manufacturing company in Troup County. The facility was expected to create more than 1,000 jobs and was expected to be fully operational in 2019.

However, due to factors including the current trade market tensions between the United States and China, the 400 acres of land near Pegasus Parkway sits mostly untouched, with no construction underway.

Sentury Tire announced in July 2017 that it was preparing to break ground on the facility. The plant was expected to have a capacity of 12 million units per year.

“The project has been put on really an indefinite hold because of all the trade regulations that are going on with China, between China and the U.S. that have specifically impacted their IPO [initial public offering] in China, which is how they were raising the majority of the capital for the project,” said Scott Malone, president of the DLDA. “They had a couple hundred million dollars in bank financing that was tied to the IPO, when the government put the IPO on hold, that bank financing pulled back as well.”

That delay in funding has resulted in a delay in the project as a whole, and with the future of trade between the U.S. and China uncertain, the date when the Chinese company could move forward on the project is unclear. However, Malone said Sentury Tire had hoped to be able to move forward until March.

“They finished 100 percent of the design of the plant,” Malone said. “They [had] spent millions of dollars in the community when the government told them that they are going to indefinitely put a hold on the IPO.”

Sentury Tire requested that the project be put on hold for approximately six years in order to allow the company to raise the funds internally. However, the tire manufacturer’s proposed location is already in high demand. Since the property is owned by the Callaway Foundation, another project may take advantage of the property’s 500-acre location, which is in an industrial park and near a rail line.

“It is a very valuable piece of property,” Malone said. “We’ve already had two more projects that have come through with Kelley [Bush of the development authority] that would like to have that property. We’ve let Sentury know that we can’t protect the property. We are blessed that the Callaway Foundation gives us access to that piece, but we will actively market it for any project that comes along.”

Malone said that there are other locations that will be available to Sentury when its funding is secured, and he still hopes to see the tire manufacturer open its location in Troup County in the future.

“They love LaGrange. They love Georgia,” Malone said. “This is where they want to be, and they need this plant. They are 30 percent over capacity in their plant in China and Thailand, and they don’t have the room to expand there. So, they have to build this plant. It is not a matter of if, it is just a matter of when.”

Local officials said that while they are disappointed by the delay, they are confident that LaGrange will continue to see economic growth.

“Sentury Tire has made the decision to delay the project for their own internal reasons,” LaGrange Mayor Jim Thornton said. “We know that our city staff and our state and local partners have done great work supporting the project to this point. The City of LaGrange and its Development Authority hope that Sentury will move forward at some point in the future, but in the meantime, we will focus on other projects and opportunities for our great city.”

According to Sentury Tire’s website, the company is a subsidiary of Sentaida Group Co. Ltd., which got its start in Quingdao, Shandong, China in 2008.