Wadley woman headed back to Uganda 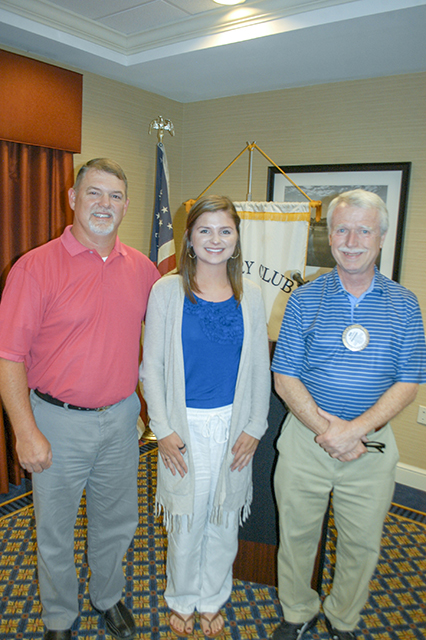 Mary Grace Brown (at center) will be taking part in an internship program this summer.. At the West Point Rotary Club meeting Thursday, she talked about her 2017 trip to Uganda. Left, is her dad, program chairman Craig Brown and right, Gus Darden, club president.

LANETT — Mary Grace Brown had the trip of a lifetime two years ago when she got the opportunity to go to Uganda for 19 days. It gave her a chance to interact with children in a far-off corner of the world from her hometown of Wadley and was an amazing experience. She will now be able to do it again, this time for 58 days as a student intern.

Mary Grace is the daughter of Valley Haven Executive Director Craig Brown. At Thursday’s noon hour meeting of the West Point Rotary Club, she talked about her 2017 visit to the Abanna’s Hope School and her upcoming trip this summer. She feels these trips to Africa are part of God’s plan for her life.

“I believe we should not only say ‘yes’ to the significant callings we have, but also to the small ones,” she said. “I want to be more prepared on this next trip, so I can make a bigger impact.”

Mary Grace and her family are members of the Mountain Springs Baptist Church in Wadley. Two years ago, she was a member of a group from the church that went to Uganda. Accompanying her were the Rev. Jimmy Sprayberry and Gary Clark, a deacon. This time she will be going with six college students, all from the Auburn area. They will be representing the Four Corners Ministry.

A junior at Auburn University, Mary Grace is majoring in rehabilitation and disability studies. She is on track to graduate in December 2020.

She said that she was most impressed from the students she met two years ago at the Abanna Hope School.

“They knew so much for their age,” she said.

She will have more time to spend with them this summer as a member of the Four Corners Ministry group.

Mary Grace feels it was more than just luck that led her to find out about this year’s trip and that they’d been looking for someone just like her. It was part of God’s plan for her, she believes, just as it was part of his plan to come up with the $7,000 she needed to make the trip.

Once they found out that Mary Grace had a chance to go back to Uganda, church members raised that much in two weeks.

English is widely-spoken in Uganda, as a result of the country being a British Protectorate from 1894 until gaining its independence in 1962. Swahili and other African dialects are also spoken. In the 57 years since being independent, there have been many conflicts in the east-central African country. A lengthy civil war resulted in hundreds of thousands of casualties.

The current president of Uganda, Yoweri Kaguta Museveni, came to power in January 1986 following a six-year guerrilla war. He long ago suspended Constitutional norms and declared himself president for life. He’s now grooming his son to succeed him.

Though landlocked, Uganda is a nation with many lakes. Most of the large ones are named for British monarchs, such as Queen Victoria and Kings Edward and George. The country is almost entirely within the Nile River basin. It’s a wildlife paradise with over 60 protected areas.