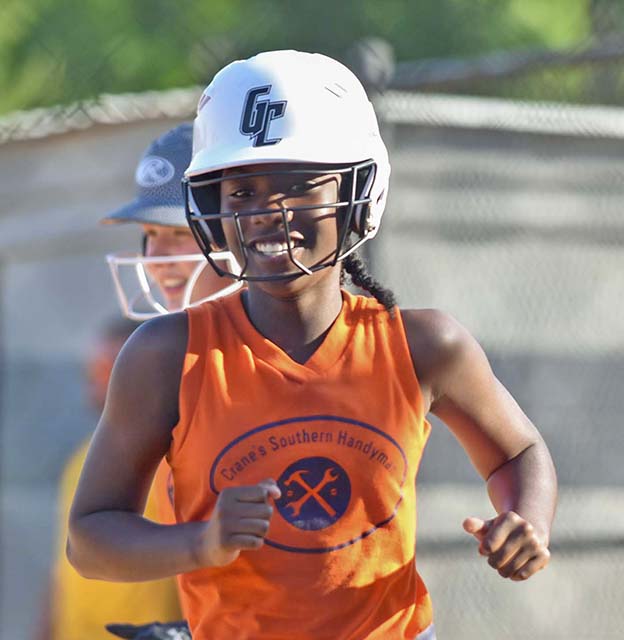 Rashad Milligan | Times-News ALL SMILES: Crane’s Southern Handyman pitcher Kali Harper breaks out a smile after crossing home base during Emily Jo Matthews’ inside-the-park-homerun in the top of the second inning.

“It was good,” Crane’s Southern Handyman head softball coach Jeff Johnson said. “They fought hard, this team is tough to beat, we’ve tied them twice this year. They’ve been the toughest team we’ve played this season, but it’s been fun. It’s been good.”

Crane’s Southern carried a 2-0 lead into the top of the second inning when a wild pitch allowed for another runner to cross home plate and increase the score to 3-0.

After a pair of walks that loaded the bases for Crane’s Southern, Family Tax Service made the pitching change to Kaitlyn Smalley. Smalley then gave up an inside-the-park-homerun to Crane’s Southerns’ Emily Jo Matthews. Only three of the runs from Matthews’ bases-loaded homer counted since there’s a five-run cap in the league’s innings.

“I think if we would’ve played better, to begin with, gotten more base runners and a few more hits, I think we would’ve been a lot better off,” Family Tax Service head softball coach Toby Arnold said.

Smalley finished the game strong on the mound for Family Tax Service, including striking out the side in the fourth inning.

Kali Harper earned the win on the hill for Crane’s Southern, as the 11-year-old threw an unofficial count of eight strikeouts in the last three innings of the game. Harper will play on Valley High School’s JV softball team next spring as a seventh-grader.

This is the final week of play for the 12 and under division at West Point before All-Star play picks up this summer. Johnson said that he’s proud of the season that Crane’s Southern has had, only losing one game this spring.

“We’ve done a pretty good job,” he said. “We’ve got some pretty good players on our team this year.”