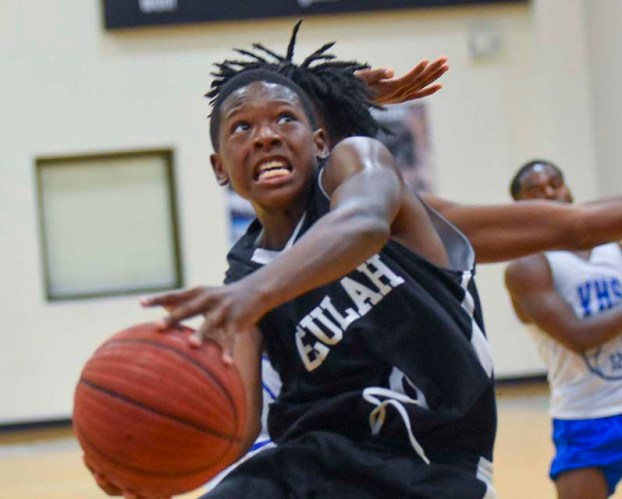 SMITHS STATION — Monday did not go as planned for the Beulah High School boys basketball team on the scoreboard, but that did not worry head coach Curtis Noble in the slightest.

“I’ve got them working,” Noble said. “As long as they keep on working, I know they’re going to be alright. We’re just starting out, you have to continue to get them together, continue to play, keep their heads up because the summer is all about trying to figure out who’s who … I liked our composure, we didn’t get out of ourselves. We’ve got a lot of work to do, and that’s what summer’s all about. Finding out what you have to do before the season starts.”

A few potential returners for Beulah were missing on Monday, including center Austin Billingsley.

“Due to football, we’re dealing with some athletes and we’ve got some who are not here today,” Noble said. “That’s just one of those things that you’ve got to work through.”

With the absence of the football players, Beulah had four smaller players on the court at the same time at points throughout the day. Teams like Valley took advantage of the mismatches by blocking multiple Bobcat attempts at the rim.

“Valley was very aggressive, they have pretty good scorers,” Noble said. “We learned something, which was how to handle pressure. You come into summer league, play against different styles, you give them a chance to play so you can coach them up.”

This upcoming season, Beulah looks to replace three of its top scorers from last year in Lonzie Portis, Tykerious Williams and Quatavious Seroyer. On Monday, senior guard Jaquavion Johnson appeared to be the next Bobcat in line to emerge as the team’s offensive leader.

“He’s been with me for about three years, and he’s a leader right now,” Noble said. “We’re going to get some more to play with him and I think we’ll be alright.”

Williams showed up to the play date and offered advice to some of his former teammates from the bench.

“That is awesome right there to have Ty come back, want to give back and go back to the guys,” Noble said. “It helps the guys understand from a player perspective what we’re looking for and the things that we want them to do for the upcoming season.”

On Friday, Beulah will be in Russell County, and on June 18, the Bobcats wrap up summer play dates at Tallassee High School.

BEULAH —  A few months after ending the regular season on a hot streak and sneaking into the state playoffs,... read more