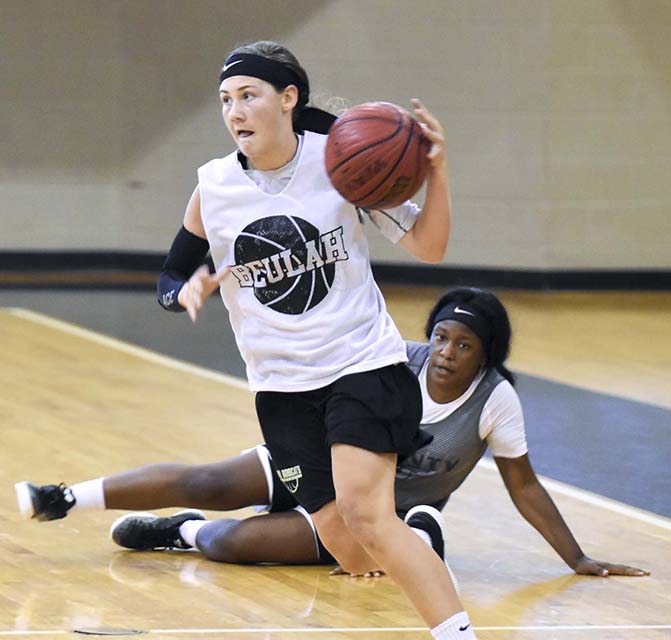 BEULAH —  A few months after ending the regular season on a hot streak and sneaking into the state playoffs, the Beulah girls basketball team is back at square one.

On Friday, the Bobcats hosted a summer play date to some more runs in.

“I like what I see,” Beulah girls head basketball coach Sabrina Milligan said after the team’s first game of the day, which was a 31-14 loss against Russell County. “We’re small. We probably average about five feet in height, but we have a lot of hustle about us. We have a lot of new faces, a lot of rookies out there and that’s why we’re doing this over the summer.”

Beulah was down 11-6 at halftime, and Russell County came out in the second frame showing an aggressive full-court press. Although the Bobcats broke the press on a couple of occasions, Beulah couldn’t convert back-to-back open opportunities at the basket.

“We had some girls wide open, so we have to get our timing down, catch the ball, finish, especially with uncontested layups,” Milligan said. “Other than that, I thought we did pretty good. You can tell we’re a little nervous, the new ones out there. They told me on the sideline, ‘Coach, I’m scared. I said, ‘don’t worry about it! Just get on out there. Do the best you can do, and keep playing.’ I’m excited about the season. We’re not that big, but we have a little bit of speed. If we can learn a few skills with that speed, I think we’ll be alright.”

In addition to finishing near the basket, stamina also looked to be a concern for the Bobcats in the second half.

“We’re not in any shape,” Milligan said. “That was our first game, we just practiced for two days and went over a few plays. That’s going to be a part of it, too, hopefully getting in shape especially by November and the season comes, we’re going to start a lot of running. We’re not big, so we’ve got to run to get a lot of easy baskets. We have to put pressure on the ball and try to get up the court. You take Danielle [Williams]  out of the picture, and everyone else is four feet tall.”

This season, Beulah is replacing its leading scorer and All-Valley Area first-team member Kensley Taylor, who was in attendance to Friday morning’s exhibition. An early candidate to fill Taylor’s role as the team’s primary scorer at the guard position looked to be freshman Savanna Clements. In the game against Russell County, Clements sifted around the court defensively to grab some steals, and offensively to keep the opposing team’s defense on its toes.

Brandy Phillips, Danielle Williams, Grace Portis and Katie Morris are also expected to return for the Bobcats this season.

“We have some good bodies coming back, I think when we get a little more experience, we’ll be alright,” Milligan said. “We’re going to get better.”

The Bobcats have eight freshmen on the team this season, and four of them have never played, according to Milligan.

“This is really their first year playing varsity, they were on the junior high team last year, and came up when their season was over,” she said. “That’s what this summer is for, to help them get better. Also, letting all of our new players get their feet wet and get used to it because it’s a little quicker than practice. Russell County has a little size on them, they’re a 6A school so they have a little size on them, but I like what I see. We should be alright.”