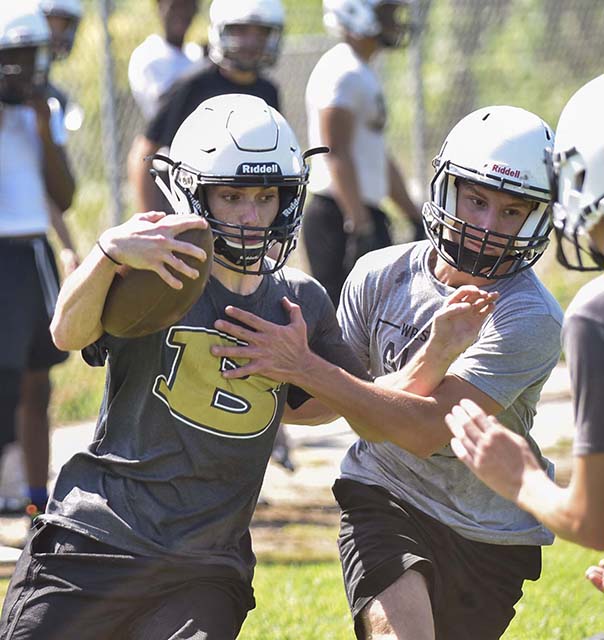 BEULAH — First-year head football coach Matt Johnson is encouraged by what he’s seen so far from the Beulah football team this month.

“We’ve had a good corps group of seniors, again,” Johnson said. “Everybody who needs to be here is here. They’re pulling some guys who have never played so our attendance has been great. Guys are working really hard, that’s our motto: To work. We have a lot of leadership.”

Johnson, who’s been at Beulah the past seven seasons as an assistant, said that this year’s focus may be higher because of the Bobcats’ historic 2018 season.

“I’m not saying it’s been easy, but when the culture has changed, you’ve shifted it in the right direction, things take care of themselves,” he said. “That’s how I’ve seen it where I don’t have to say a whole lot, don’t have to do a lot, it just gets done. That’s with the coaches, that’s with the players, with everybody. Things are happening that I don’t have to really talk a lot about, and it’s a good thing. The kids know what to expect, they know what our standards are and they’re fulfilling all of our obligations. It’s really nice to step into a position where things are really taking care of themselves.”

In this offseason’s early stages, Johnson said that he’s very encouraged by the growth of his linemen and named senior running back Chris Person the standout athlete among the entire team.

Last season, Person had a breakout season in the backfield for the Bobcats and rushed for 1,040 yards and eight touchdowns on 152 attempts. After Tuesday’s workout, Person returned to the weight room to get more reps in.

Johnson, who said that he hopes to keep his office desk clear for as long as possible, cited organization as a primary key for the Bobcats’ improved focus in the past two offseasons.

Johnson is replacing Cody Flournoy, who was named the 2018 Alabama Football Coaches Association (ALFCA) 3A Coach of the Year.

In April, Flournoy accepted an athletic director and head football coaching position at 5A Jackson High School in Jackson, Alabama. Johnson said that he still talks with Flournoy on a consistent basis and asks him for advice on how to handle certain situations as a head coach.

Johnson said that thanks to his current coaching staff, Flournoy, his players and the Beulah community, his first couple of weeks on the job have been smooth sailing.

“I told people at the community meeting, and everyone that I know that I want people to be involved with our football program,” he said. “I think it’s important for kids to see the community and talk to them. All that [community members] have to do is come in contact with me and I’ll give them a lot of stuff to do. If they want to help, we need it.

“I want more involvement with the community, not just on Friday night. We have six home games, I don’t want to see you six times a year. I want to see you a lot more, and these kids need to see you more than that.”

With Johnson’s official hiring coming so close to summer last month, he said that the Bobcats currently have no scheduled 7-on-7s for the month of June, but plan to organize some non-contact scrimmages with other local schools in July.