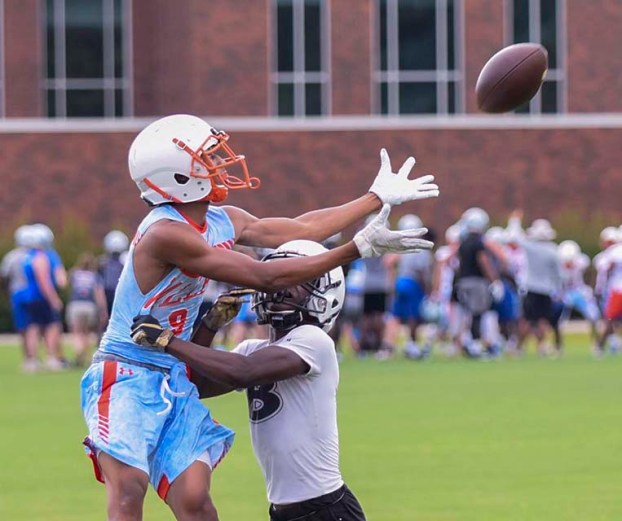 Rashad Milligan | Times-News up for grabs: A Beulah defender attempts to break up a pass from reaching a Valley receiver during Tuesday morning’s 7-on-7 event. Both teams also faced LaGrange High School, Auburn High School and Benjamin Russell at the event.

The Rams and the Bobcats began the day facing off against each other.

“We started off kind of slow against Valley,” Beulah head football coach Matt Johnson said. “They have a really good team, some good competitors and good athletes, but after that first series, the guys settled in, made some plays, the quarterback played really well. Kaleb Abney was composed back there, he threw really well. He looked very confident early on, which is something that we wanted to see in his first year as a starter, he played really well.”

Valley head football coach Buster Daniel said that he was encouraged by his team’s effort today, highlighted by the play of junior quarterback Gabe Harmon. Harmon was the only available quarterback for Valley during the day because Will Kennedy was at a baseball camp, Daniel said.

Harmon showed a wide range of his passing abilities throughout the day through short and deep passes.

Valley sophomore KD Hutchinson stood out with his athleticism and route running early in the day. Daniel said that he expects Hutchinson to build on his freshman season where he started at defensive back for the Rams. Donnavin Shealey and the defense also impressed Daniel.

Athletes in the Beulah secondary were able to grab a few interceptions early on Tuesday morning.

“We’re going to be able to rotate a lot of those guys in our secondary in,” Johnson said. “We have a lot of depth right there, which is good to have. These are rotating and not missing a beat. It was good to see some interceptions, of course, you want to see that in a 7-on-7-type setting. Dashawn Jones had a couple of picks. Dylan Coleman, who’s also a senior and is actually a backup quarterback, is the leader of that group. Those guys are on the same page, they communicate really well, coach [Stan] Pepper does a great job with them in practice with communication. They executed at a high-level today, which allowed us to get a couple of those interceptions.”

Valley has no official 7-on-7s scheduled for the remainder of the summer, but Daniel said that he expects the team to work out with another school at the very least in July. Beulah is currently finalizing a date in July to compete at Russell County.

BILOXI, MISS. — The Alabama Hawks have won the 2019 Youth Basketball of America (YBOA) national championship.  “We went down... read more