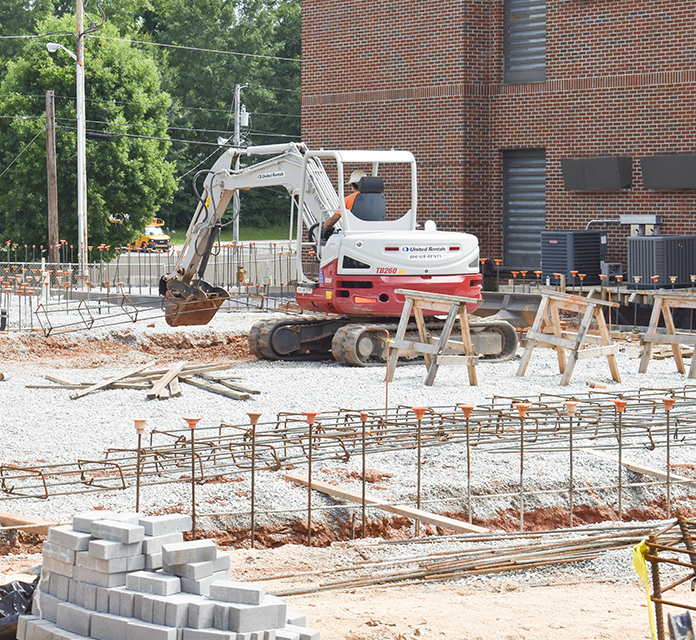 Construction crews are working at the Chambers County Jail to complete a 15,000-square-foot expansion of the current jail. The expansion will add space for 120 more inmates. — Dustin Duncan

LaFAYETTE — The progress of the Chambers County Jail expansion project has Chambers County Sheriff Sid Lockhart hopeful inmates will be safer during their time locked away.

The jail is currently going through a 15,000 square-foot expansion, which will accommodate about 120 more inmates. Lockhart said the biggest reason for the expansion is to accommodate a growing female population within the jail’s walls. Once the project is complete, there will be room for 40 women, instead of the 16 spots currently.

However, the biggest problem is that there isn’t a way to separate violent and non-violent offenders on the women’s side.

“If you come to jail because of a bad check or a murder charge, you are in the same cell block,” he said. “There is no way to segregate the women.”

Lockhart said it has been that way since the late 1980s when the jail was constructed.

“It should have never been that way,” he said.

Currently, Freeman and Associates, the jail’s general contractor, is in the process of doing the plumbing on the site and if the weather is good, blocks will be going up soon, Lockhart said. Chambers County Attorney Skip McCoy said the contractor is also hopeful the flooring can be poured in the next couple weeks.

Lockhart said the process has been a challenge in more ways than one. First, there was contaminated soil on the property due to old gas and oil tanks on the property. He said contractors had to dig up all the soil and haul it away. Then, there was a sewage pipe that either needed to be moved or encased in concrete to continue construction.

There was a small dispute between the county and the city of LaFayette about who should pay for moving it but ultimately the contractor agreed to encase in concrete. Lockhart said all those issues cost the county several weeks of construction.

The new jail will be more like army barracks than cell blocks, which is a modern style for non-violent offenders, Lockhart said. The violent offenders will still be in cells.

“We felt like it was more cost efficient than adding more cells,” he said.

When the new jail is expanded, Lockhart said older parts of the jail, including leaking pipes, will undergo renovations.