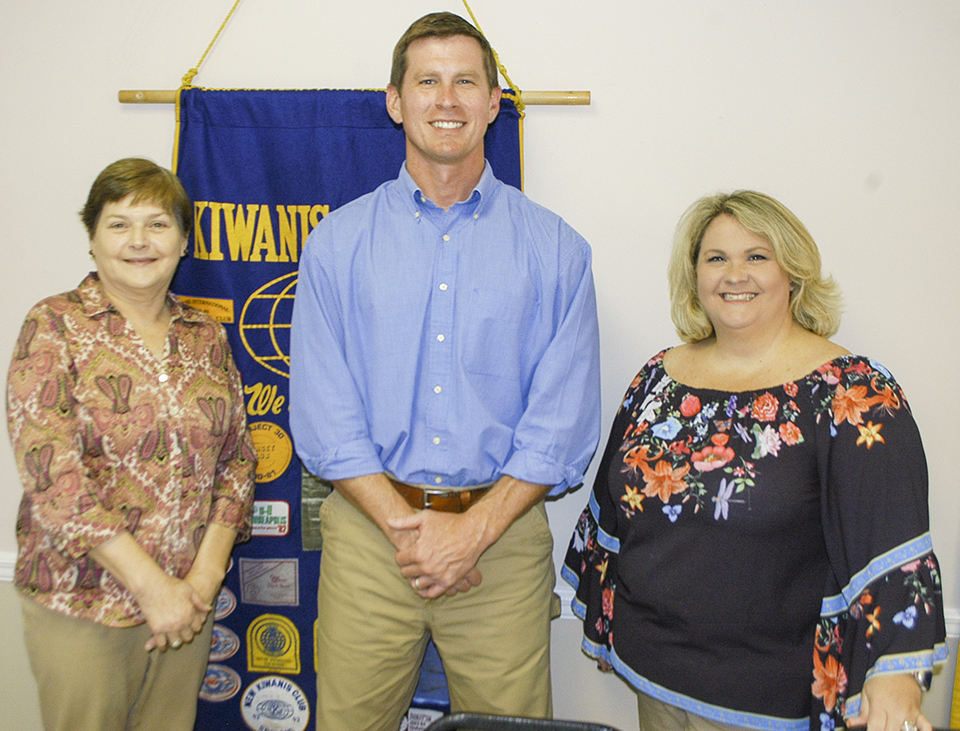 VALLEY — Alabama drivers will be paying an extra two cents a gallon for a new gasoline tax that will go into effect Oct. 1 and another two cents per gallon the following October. At present, the state has a gas tax of 18 cents per gallon. It will be going up to 20 cents this year and 22 cents in 2020. It’s the state’s first gas tax increase since 1992. A total of 39 other states have higher gas taxes than Alabama. For the average driver, a two-cent per gallon increase will mean an additional $5 per month from what they are paying now.

Chambers County Highway Engineer Josh Harvill was the guest speaker at Wednesday’s meeting of the Kiwanis Club of Valley to talk about the benefits coming to the county because of the gas tax. State Rep. Debbie Wood and County Commissioner Debra Riley were guests of the club and added their input as well.

“I’d like to come back this time next year to update you on what we’ve done,” Harvill said, making the point that the tax won’t go into effect for several months. “We are in a new place in Alabama, and it’s a very exciting time.”

One way Chambers County is ahead of many other counties in the state is that it has a transportation plan based on where people live and travel.

“We have a top 25 list with Phillips Road being the most traveled county road,” he said. “We have an expansion project going on there now. We have to relocate some utilities as part of that project. The gas lines have been moved, and the water lines will be moved next. This takes time, and we ask the public to be patient with us.”

This is a $4 million project with the goal being to relieve traffic congestion around Huguley Elementary School in the mornings and afternoons.

Harvill has been with the county highway department since 2002.

“The cost of resurfacing a road has doubled over that time period,” he said.

Several years ago, the Alabama Legislature asked the state’s Transportation Institute to do a report on what a gas tax would do for the state. They produced a 60-page report with a main conclusion that it all depended on what the people wanted.

“How many traffic delays and potholes are you willing to put up with,” as Harvill put it.

The state highway department, said Harvill, has some built-in advantages over county departments.

To be at the same level where the state is, Chambers County would have to resurface 29 miles of roads and put in two to three new bridges every year. The county is presently doing 11 miles of resurfacing and putting in one or two, new bridges a year.

“The lifespan of a bridge is 50 years, give or take a few years,” Harvill said. “When it has that much age, you will start to see deterioration and will have maintenance issues.”

Statewide, an average of 42 percent of Alabama bridges are at least 50 years old. At present, Chambers County has approximately 800 miles of roads, with around half of them being paved and half of them dirt roads.

“Every year, we are trying to do more with less, and that goes to employees,” Harvill said. “You have to have employees in a highway department. Thirty-nine percent of our budget goes to employees and 43 percent to equipment and materials.”

“It just jumped off the page the way Alabama had not kept up for the past 20 years,” he said.

The new tax will also impact those who drive electric vehicles. They will be paying an additional $250 registration fee.

Harvill said there’s a lot of misinformation out there right now on social media about the new gas tax.

“Don’t be scared that it will double over the next 10 years,” he said.

“It has to be used on asphalt and concrete,” he said. “We will have to have an annual transportation plan, saying how much we plan on spending and at the end of the year a report on how much we spent.”

State Rep. Wood said that good planning pays off. She said that in the past Chambers County had gotten some funding for bridges thanks to former engineer Henry Hawkins being prompt and thorough with reporting on the need for bridges. Harvill said that Hawkins had a sign at the county highway department on a bridge widening project that had taken place at Exit 77 on I-85. The total project had cost $11 million.

“Highway dollars don’t go as far as they used to,” he said.

Wood said that the new gas tax will help open up the port of Mobile to more shipping. “That will help the entire state,” she said. “A lot of what’s imported to Alabama comes through the port of Savannah, which raises costs. It may take five years to see a difference, but there will be one.”