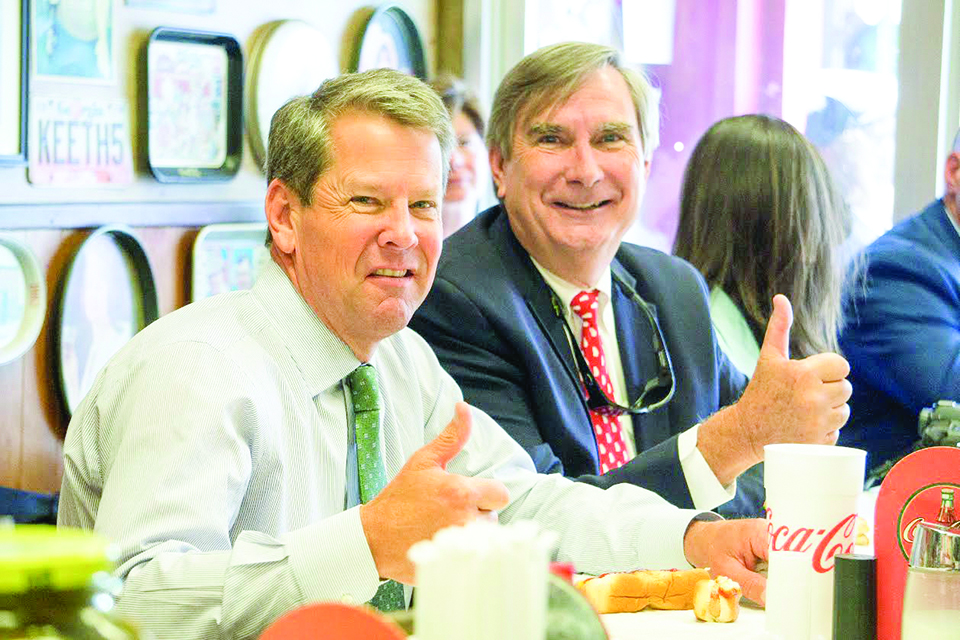 Georgia Gov. Brian Kemp and Troup County Commission Chairman Patrick Crews give a thumbs up while sitting at Charlie Joseph’s in LaGrange.

Gov. Brian Kemp spoke about the progress the state has seen during his short time in office Tuesday morning in LaGrange.

The first-term governor was the guest speaker during the LaGrange-Troup County Chamber of Commerce’s Early Bird Breakfast, which was held at Del’avant Event Center. Kemp jumped from topic to topic, hitting on education, healthcare and job growth.

“Our wages are on the upswing; our unemployment continues to be the lowest it’s been in 18 years. Our graduation rates are increasing while incarceration rates are decreasing,” Kemp said. “We are literally a hub for job growth in the Peach State, outperforming many in national trends.”

Kemp said his administration has focused on increasing teacher pay and funding school safety. The state budget included $69 million in school safety grants, which factors out to $30,000 for every public school in the state.

“Our balanced budgets this year have fully-funded public schools and education for the second year in a row. That’s $8 billion going to our local school systems across the state,” Kemp said. “We have done a historic teacher pay raise, largest in the state’s history, by giving teachers and hard-working educators a $3,000 pay raise that includes school counselors, co-workers and speech pathologists.”

Kemp said several measures have been taken to improve healthcare around the state, including the Patients First Act, which allows flexibility to improve government-funded health insurance for lower-income residents.

“We are going to overhaul our healthcare system to reduce cost, improve access and enhance quality to care,” Kemp said. “We are going to address Georgia’s problems with innovative, Georgia solutions to ensure a brighter, healthier future for our state.”

Kemp said the goal from the Centers for Disease Control is to stop the spread of HIV in the next decade, a goal he called obtainable.

“I’ll tell you, after being at the CDC and talking to them about what they are focusing on and the new medicines we have in this fight, this [goal] is in reach now,” Kemp said.

The governor briefly touched on the state’s newly passed abortion bill, which bans abortions after a fetal heartbeat is detected. Approximately five protestors were outside of Del’avant Tuesday morning, holding signs that referred to the abortion bill and the possible negative statewide economic impact that could come, should the movie industry decide to cut back filming in the state, a threat that has been made by several prominent filmmakers and actors in the wake of the bill.

“I’m proud of the LIFE Act, and our pledge to protect the innocent, unborn,” Kemp said.

Kemp also spoke about a focus on ending human trafficking and cracking down on gangs.

“This is an issue that is prevalent no matter where you go — rural, urban, suburban — it does not matter,” Kemp said on gangs. “This touches all of Georgia and I plan on doing something about it.”

After his speech, Kemp spent part of his day at Charlie Joseph’s, finishing off a bucket list of local eateries around the state. He said he’s previously visited The Varsity in Atlanta and Nu-Way Weiners in Macon — a group he called the “hot dog trifecta.”

“It’s especially going to be a great day for me because I am going to complete the Georgia hot dog trifecta today at Charlie Joseph’s,” Kemp joked.