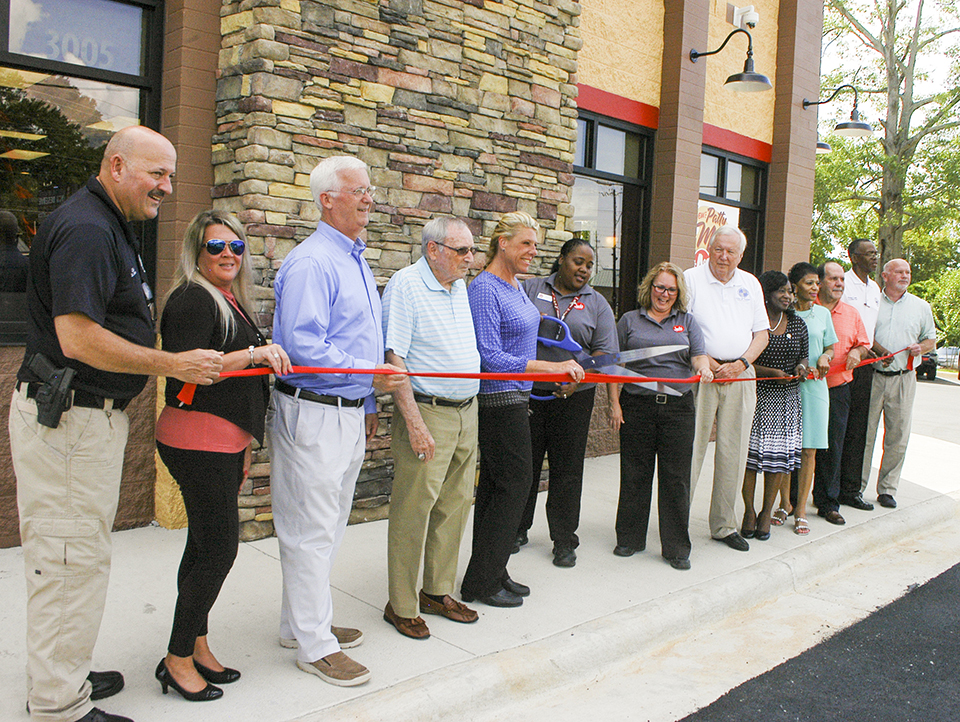 VALLEY —A busy day at the newest Jack’s restaurant was highlighted with an official ribbon cutting at 5:30 p.m. on Monday afternoon. The newest Jack’s had been very busy throughout the day, with an estimated crowd of 75 people gathered even before its 5 a.m. EDT opening. An opening day promotional promised the first 50 customers with free breakfast for a limited period of time. First in line was a man who had been there since 3 a.m.

“We’re in Alabama, Georgia, Mississippi and Tennessee,” she said. “There are 57 members of our crew here in Valley and eight managers. We are open each day, from 5 a.m. until 10 p.m. on Sunday-Thursday and 5 a.m.-11 p.m. on Fridays and Saturdays.”

“We are so happy to be here in Valley,” said Kim Hawkins, regional director of Jack’s Inc. “We are very active in the communities where we have restaurants. We do catering, and we have spirit nights. We are supporting the local library’s summer reading program. Our company has grants to help people overcome misfortunes such as house fires.”

“Anything we can do to help, [we try to do]” said Jo. “We want to be part of the community. We will sponsor banners for events.”

The first Jack’s location in Homewood, Ala. is currently undergoing a major facelift. Several other of the older locations are undergoing major improvements as well.

That first location was a walk-up hamburger stand that served 10-cent sodas, 15-cent fries and 20-cent shakes. The newer locations embrace an “All About the South” theme. The new store in Valley has Jack’s newest look and is one of the company’s showplace locations.

Valley Mayor Leonard Riley was one of the first 50 people to arrive, getting there at approximately 4:45 a.m. He said that he’s been looking forward to the opening and is most pleased to have this new and popular restaurant in the city.