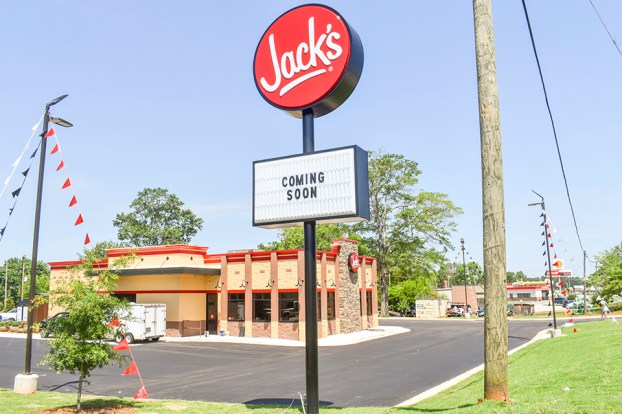 Jack’s in Valley will open its doors to the public at 5 a.m. on Monday, June 17.

Jack’s will open for business June 17

Jack’s Family Restaurants announced Tuesday that it will officially be open for business at 5 a.m. on Monday, June 17 at 3005 20th Ave. in Valley, according to a news release from the company.

The restaurant will kick off its grand opening by giving the first 50 customers in line at 5 a.m. free breakfast for a month. There will also be a ribbon cutting with Valley Mayor Leonard Riley and other city officials at 5:30 p.m. A 6 p.m., there will be additional giveaways, including a $500 gift card.

Riley said the wall of restaurants on Highway 29 in Valley is just about full with the most recent addition, and Jack’s secured the only spot left that would have accommodated its construction needs.

Moreover, Jack’s will fit in nicely with the rest of the dining options in the city, Riley said.

“They are in an excellent location,” he said. “They are a great addition to Valley, and they have a wonderful breakfast.”

Starting on June 18, the restaurant will feature coupon giveaways with limited supplies.

The week before the new store opens, potential customers can enter to win free Jack’s for a year through a Facebook content. To be eligible, customers must enter the contest through the restaurant’s Facebook page.

“Every time we open a store, we are excited for the chance to meet our new neighbors and

become a part of a new Southern community,” Taylor said in a news release. “Our mission at Jack’s is to serve quality handmade food and Southern hospitality, every day. That’s something that should fit right into Valley.”

Riley said the addition of Jack’s not only increases Valley’s visibility off Interstate 85, but it will also contribute to an above average year in sales tax revenue for the city. He said sales tax revenue in Valley is up $250,000 in the first eight months of the fiscal year.

“Our retail is doing really well,” he said.