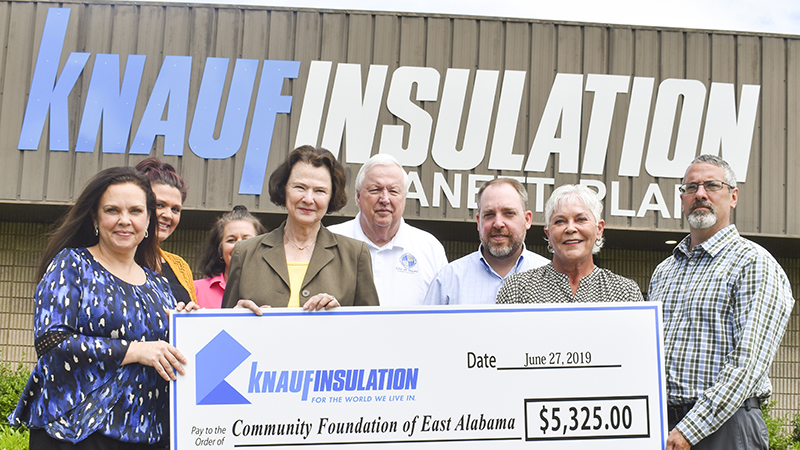 LANETT — Knauf Insulation in Lanett donated more than $5,000 Thursday to Lee County tornado victims through a ground-up campaign involving several of its employees.

The funds were presented to the Community Foundation of East Alabama in Opelika, which serves as a conduit between the donated funds and those in need. Altogether, the plant donated $5,325 to tornado victims.

Andrew Shoults, Knauf plant manager in Lanett, said the idea to take up donations didn’t come from the corporate office but from the employees of the Lanett plant.

“We had people in our plant say people were affected by this storm, and we wanted to do something about it,” he said.

Beth Muncie, senior human resources manager from the corporate office, said several employees were personally affected by the March 3 tornado in Lee County. She said some people lost their homes, sustained severe damages to their home or had family members missing for several days after the storm.

The tornado on March 3 killed 23 people and destroyed 52 homes in Lee County, centering mostly on Beauregard.

Shoults said the funds for the donation didn’t only come from inside the plant but also from Knauf’s six operating plants in the United States.

Nathan Kastner, chairman of the Community Foundation of East Alabama, said the nonprofit organization acts as a catch-all bucket for whatever the community needs. He said there has been a tremendous outpouring of support from the community to help tornado victims, and now it’s about figuring out where is the best place to put those donations.

He said the organization reached out to other individuals in Alabama who have gone through tornado damage.

Kastner said they are hearing the response in the East Alabama region has been one of the strongest they have ever seen.

“It is a testament to our people,” he said. “It tells you just how much of a community we are.”

Kastner said after the initial shock of the storm wore off, the needs were things like how to pay for getting debris to the side of the road and how to deal with blood shortages.

Now, the needs are rebuilding homes and getting people back to a normal life.

“It has been donations like this that made it possible to rebuild,” he said. “We are now reaching the point where we can go from 15 miles per hour to 115 miles per hour in the next few months.”

Kastner said there is a focus on building tornado shelters and storm-proofing homes.

“It can’t be done unless people like you respond like you have,” he said. “We thank you.”