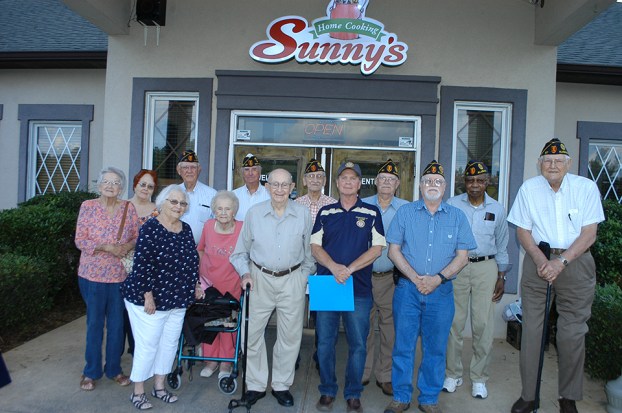 VALLEY — American Legion Post 67 met Tuesday evening to finalize plans for this year’s A Day for the Veteran event at Valley Community Center. They’d originally planned it for Saturday, June 22, but due to some conflicts, it was shifted to July. The new date is Saturday, July 27.

The purpose for A Day for the Veteran is for local veterans to have an opportunity to meet on a one-on-one basis with representatives of the Veterans Administration, the VA hospital and support groups such as Vet to Vet.

“There’s a lot of veterans out there, especially younger veterans, who have honorably served our country and have earned benefits they may not be aware of,” said Post Commander Lanny Bledsoe. “A Day for the Veteran gives them an opportunity to sit down with people who can talk to them all about their benefits.”

Attendance has been good at past Days for the Veteran, but Bledsoe and other members of Post 67 believe it can be ever better with more advance promotion of the event. To help accomplish this, members of Post 67 will be putting posters up all over town. Starting on Saturday, July 6 and continuing through the next three Saturday mornings, Post 67 members will be at the Community Center promoting the upcoming Day for the Veteran and urging those they meet to help get the word out.

“We will be answering questions any veteran or relative of a veteran may ask us,” Bledsoe said. “We will do that the best we can, but the main thing is to get them there on July 27. At this point, the more information we can get out the better.”

Bledsoe said that he’s certain there are veterans out there who needs help.

“There are younger veterans out there who are having problems. We can get help for them,” he said. “We also want to know about any local veterans who may be home bound or in a nursing home. We want to assure them they have not been forgotten. We want to have contact with local veterans or families who may have children in the military.”

Bledsoe said that Veterans’ Memorial Park in Valley tells a story everyone needs to know and appreciate.

“There are young people out there today who have no idea of the price that’s been paid for freedom, a price that’s been paid by families right here in the Valley,” Bledsoe said. “Memorials in the park bear the names of 93 young men who died in World War II, Korea, Vietnam and Afghanistan. I would like to see local schools taking field trips there and for the students to read those names on the monuments. They need to know that local men died in past wars.”

A special guest for the Tuesday meeting at Sunny’s Restaurant was Ron Wheeler, the new commander for District 24 of the American Legion. He and his wife Cheryl live in the Cusseta area, and Ron is active with Post 152 in Opelika. A veteran of Operation Desert Storm, Wheeler retired from the U.S. Army in 2010 after a 26-year career.

“Cheryl and I love to help fellow veterans,” he said. “That’s why we are active in the Legion. We go to the Bill Nichols Veterans Home (in Alexander City) two times a month. We enjoy visiting and interacting with them. We need to keep supporting them.”

Wheeler said he appreciated what Post 67 was attempting to do for veterans through its Day for the Veteran outreach.

“Many veterans are having problems and don’t know who to turn to,” he said. “The VA is very busy, but I think it’s getting better.”

Wheeler said he has been visiting American Legion posts throughout District 24.

“Every post has problems they are trying to address,” he said. “Some don’t have a good place to meet and others are trying to keep their membership up. I’m encouraging our posts to continue meeting on a regular basis and to keep talking about ways they can help their fellow veterans. I think you all here at Post 67 are doing great. You have a good crowd here tonight.”

Wheeler said it’s very common for veterans who move from one community to another to lose contact with the Legion.

“They may have been very active where they were living, but when they relocate somewhere else they don’t know anyone from the post in that community and don’t know how to make contact,” Wheeler said. “They quit being active in the Legion, and that’s not good. Such people need to be contacted and to get active in their local post. The more active members we have the better off we are. Every little bit helps.”

Wheeler said that he’s been active in helping veterans affected by the March 3 tornado in Beauregard.

“The veterans there who are members of the Legion have gotten help from us,” he said. “The devastation I’ve seen there is unspeakable. We need to do what we can to help those who live there.”