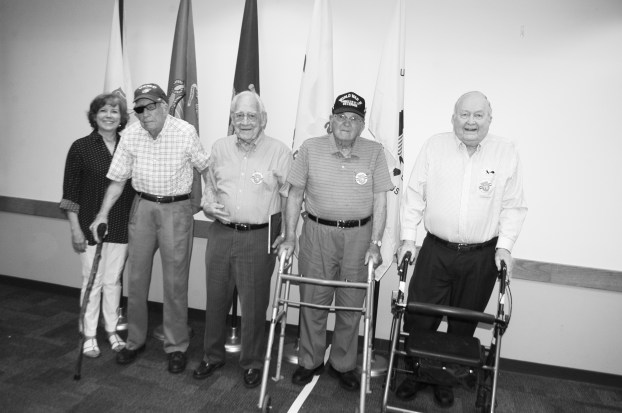 At 6:30 a.m. on June 6, 1944, troops began landing along the coast of France. By midnight more than 155,000 American, British and Canadian forces had made their way ashore along a heavily-fortified 50-mile stretch of the Normandy coastline.

“More than 5,000 ships and 13,000 aircraft supported the D-Day invasion,” said Library Director Mary Hamilton in introducing Dr. Stone. “By day’s end, the Allies had gained a foothold on continental Europe. The cost of lives on D-Day was high. More than 9,000 Allied soldiers were killed or wounded. but their sacrifice allowed more than 100,000 soldiers to begin the slow, hard march to liberate Europe.”

Of the 16 million Americans who served our country in World War II, less than 4 percent of them are still with us. Their average age is 96.

The local WWII veterans present for the program included Howard Kitchens, 91, who saw action on Okinawa during his four years as a U.S. Marine; U.S. Army veteran Bill Hayes, who served in 1945-46, who served at the U.S. Headquarters Command under General Dwight D. Eisenhower; Ed Davis, 93, who served in the U.S. Navy from 1943-46 and served in the Pacific, and Yancey Sanders, 96, who was a nose gunner on a B-24 and became a German POW after his plane was shot down over Hungary.

A retired history and ethics instructor from Southern Union State Community College, Stone visited Normandy last summer. She said that it had been a very moving experience to visit the Colleville-sur-Mur American Cemetery and Memorial, where a total of 9,388 U.S. soldiers lie at rest. The June 6 invasion wasn’t the first attempt by the Allies to breach Hitler’s Atlantic Wall. In August 1942 a force of Canadians, British and a few American soldiers attempted to take the occupied port of Dieppe, France with terrible results.

“They suffered 60 percent casualties,” Stone said. “Almost all their equipment had been lost or captured. The Allies learned that they’d need more than 6,000 men and 500 vessels to have a successful invasion.”

Any beach along the German-held coastline of France was a very dangerous place to cross. There were many concrete bunkers and pillboxes, all kinds of obstacles to get around and an estimated 15,000 mines in your way.

“It’s been said that the concrete that was put there would have filled Yankee Stadium 11 times,” Stone said.

It would be quite a challenge to break through that wall, but Allied leaders knew it had to be done.

“They had agreed on an assault plan at the Teheran Conference in 1943,” Stone said. “Churchill had promised the command to one of his admirals, Allen Brook, but President Franklin Roosevelt felt it should go to an American, since the U.S. was contributing more men and equipment for an invasion.”

Preparing for an invasion involved a massive deception campaign to mislead the Germans. It was built around the idea that General Patton would lead First Army Group across the channel at Pas-de-Calais, the closest port city to England. The Germans were convinced this would be the place the invasion would take place. In the early morning hours of June 6, so-called Rupert dummies were dropped by parachute in the area around Calais to make the Germans think this would be where the invasion was taking place.

June 5 was set as the original landing date but was delayed by a report from British meteorologist James M. Stagg. He told the high command that the biggest storm in 20 years was barreling down on the English Channel. The report was so gloomy that Eisenhower was expecting to delay the landing for weeks.

“He expected to put it off until June 19,” Stone said. “That’s when the tide would be right for the next landing.At 9 p.m. on June 5, Stagg told the generals that there would be a brief break in the storm and that morning of June 6 would offer a marginal window.  At 10:45 p.m. on June 5, a go order was given.

“By 11 p.m. ships were pulling out and the paratroopers were loading up,” Stone said. “The Rupert dummies were sent in, and the 82nd and 101st Airborne Divisions were ready to go. They were dropped by C-47 transport planes in areas behind Omaha and Utah beaches.”

At 5:30 a.m. Operation Neptune began. This involved a naval and air bombardment of the Normandy defenses. The B-17s flying in dropped an estimated 18,000 pounds of bombs.

“At 6:30, the first waves of soldiers went in,” Stone said. “It was immediately apparent that things weren’t going well on Omaha Beach. The air force had missed key targets due to heavy cloud cover, and the tides were high. Men going in faced horrific conditions. They had to get past the mines, the artillery and the small arms fire. There was no safe place on that beach, and if you were fortunate enough to cross it there were some cliffs you had to climb.”

One of the toughest objectives to take was Point du Hoc. Approximately 250 U.S. Army Rangers were given the task to scale those 150-foot-high cliffs and to silence the guns raining death on the soldiers below. It took them 36 hours to do it, and only 90 men were left.

At one point, Gen. Omar Bradley was considering a withdrawal.

There’s no consensus on the cost of taking Omaha Beach. Casualty figures range from 2,000 on the low side and 5,000 on the high side. Omaha Beach had to be taken for the invasion to continue inland. With all the beachheads taken, Allied forces could link up and push the Germans farther inland. Five other beaches ”— Utah, Sword, Juno and Gold — had been taken while the struggle continued at Omaha. Once all areas were secured, Omaha became the site for the Mulberry harbors, or prefabricated landing areas, were established to get men, vehicles and supplies on shore. In the next 100 days following D-Day, more than one million tons of supplies, 100,000 vehicles, 600,000 men landed and 93,000 casualties evacuated.

The ultimate goal was the surrender of Nazi Germany. That took place on May 8, 1945.

HOGANSVILLE — The Valley Rams boys basketball team was back in action on Thursday afternoon for a summer play date... read more