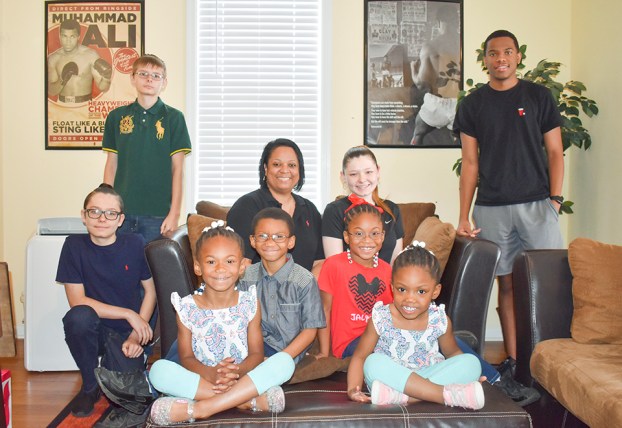 VALLEY — Angela Robinson always wanted a daughter, but after moving from Huntsville to La-Grange and settling in Valley with her two biological sons, she now has a bigger family than she could have imagined.

Robinson is a fourth-grade teacher at W.O. Lance Elementary School in Lanett and is a single mother to 10 children. She adopted eight children — two sibling groups of four — after spending time as a foster parent.

Robinson said she takes everything as a sign and knowing she wanted a daughter while she lived in LaGrange with her two sons — Jakeece and Jaden — she would see signs around a downtown fountain encouraging people to adopt or become foster parents. When she moved to Valley, she began to take classes and was blown away by the need for foster parents in the area.

“I didn’t realize how much there was a need for that until I took those classes,” Robinson said.

Her first foster children were a group of four siblings, who were 5, 6, 8 and 11 years old. Through the four children, Robinson had gotten her daughter, but three boys came along with her.

She said it didn’t take much time to realize she wanted to keep them permanently. There was a two-year waiting period because the birth parents had a right to try to earn back their parental rights.

According to Julia Hyde, Chambers County Department of Human Resources director, parents must be clear of all substance abuse and complete several months of clean drug screens. They also need positive recommendations from a substance abuse counselor and proof they are putting things in place to address trigger points to relapse.

Layla Letson, DHR service supervisor, said if the 12 months are elapsed and the birth parents are still working hard to improve themselves, the county will continue to work with them. However, if it gets to a point where DHR knows the parents aren’t making strides, the county will move toward the termination of parental rights.

She said the county will then go to court and the judge rules. If parental rights are terminated, the child is available for adoption.

Once this happened for the sibling group in Robinson’s home, she spoke with her two biological sons to make sure everybody was on board.

“They never had a problem,” she said. “In fact, they said they wouldn’t know what it would be like if they were gone because they were around for so long at that point.”

Robinson has been a foster parent for 10 years and has seen several foster children come in and out of her home, recently adopting another sibling group of four — three girls and a boy — on April 22.

She said there was no way to predict she would be the mom of 10 children when she started fostering children, but now, she can’t say no.

“If they call me and I have space, I’ll tell them to bring them on,” she said.

Robinson continues to add on to her home to create more room to accommodate children. Her current living room used to be her garage until she transformed it to make more space.

The most critical time for a foster parent can be the first few days in a new home, Robinson said. She said a lot of kids who come into a home are not used to structure or consistency, and those are both important any time an authority figure is working with children.

“When you have kids who are pretty much taking care of themselves, or not having much guidance at home, when you bring them in that is pretty much a conversation you must have immediately,” she said.

Robinson said there must be a foundation and ground rules set immediately. She said it is all about setting a routine and following it every day, such as doing the same thing when getting ready for school each day and eating dinner as a family each night.

“I am a firm believer in setting the ground rules and let them know there are consequences for everything,” she said. “I am firm, but I’m fair and they know that.”

Usually, children follow suit, she said, as long as she is consistent. She said she rewards successes just as well as administering consequences for poor behavior.

“Everybody is treated on the same playing field,” Robinson said. “If my other children have chores to do, so do they, and if I’m taking one child to Burger King, everybody is going to Burger King.”

Seeing those actions has a big impact on new foster children in the home, as well as having her adopted children there to help a new child understand what home life is like. She said there is no differentiation between any children once they are inside the home.

When Robinson fostered her first set of siblings, she noticed that the oldest wanted to be the mom of the group and felt she had to take on that role of bathing, clothing and feeding her younger brothers. At the time, Robinson’s soon-to-be daughter was 8 years old, so Robinson had to interject herself to let the child know she didn’t need to fill that role any longer, and she could just be a kid.

“You could tell they were used to having to do that,” Robinson said.

She said the older siblings, in both cases, were hesitant at first to relinquish those parental duties but after time, they began to trust her after watching it happen.

“They had to see it in action,” Robinson said. “I couldn’t just tell them, I had to show them.”

That’s where the consistency has to be part of the foster children’s lives, she said. The children, many times, are taken from a situation where everything is changing all the time, and they don’t know that isn’t normal, Robinson said.

Robinson, who is a black woman, has a family made up of four daughters, one of whom is white, and six sons, three of whom are white.

She said her family does get a few stares in public when they are out in a big group, but race never played a role in her decision to foster or adopt.

“It didn’t matter to me. I love all people,” Robinson said. “I knew we would get some stares, and I had to talk my kids about how to handle it as well.”

She said the family just brushes it off and keep moving forward.

“It doesn’t affect our family at all,” she said.

Robinson said you have to have a passion for young people to foster children, which she does in her home and her classroom.

“I know that I want as many children as I can possibly help to be safe and stable at all time,” she said.

It can be hard for Robinson to watch foster children leave her home and returned to their birth parents, but at the same time, she knows it’s usually a good thing. She said she will continue to foster children if DHR calls because she can’t turn down a child that needs help.

“I don’t know when I’ll ever stop because I have a hard time saying no to a child in need,” Robinson said. “That’ll probably never change.”

One Stop provides counseling for juveniles

LANETT — The blue top building at the L.B. Sykes complex in Lanett is a busy place on Wednesday afternoons.... read more