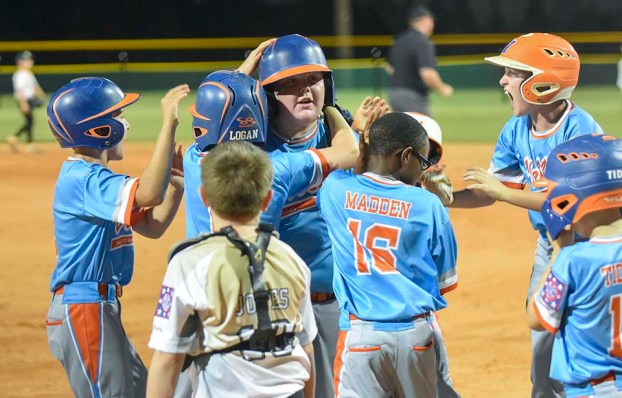 WELCOMED: Valley All-Star first baseman Jax Miller greeted by his teammates at home plate after hitting a three-run home run in the bottom of the first inning. Photo by Rashad Milligan

VALLEY — There was a packed house at field three of the Valley SportsPlex on Friday night to watch the Beulah and Valley All-Stars duke it out.

Valley came out on top with a 13-3 victory over Beulah with the mercy rule being called in the bottom of the fourth inning.

Beulah’s bats came out hot in the game with a leadoff single by Hunter Duval. A few at-bats later, a wild pitch scored two more Beulah runners to increase the team’s early lead to 3-0.

“We executed well,” Beulah coach Rusty Arnett said. “Offensively, we looked good, and overall I thought we played a good baseball game. That’s a good fundamental baseball team, Valley’s good. I was proud of our boy’s resilience to keep fighting. We made some good plays.”

After a meeting at the mound, Valley struck out the next two batters to end the top half of the inning.

When Valley came up to bat, the team’s bats were as hot as Beulah’s as far as getting runners on base. Batting fourth in the lineup, Jax Miller stepped up to the plate as Valley trailed 3-1 with two runners on base.

“I wanted to get on base,” Miller said in regards to his mindset stepping up to the plate.

Miller ended up crushing the ball over the fence in left field for a three-run home run to give Valley the lead.

Both teams used multiple pitchers in the four-inning game due to a 40-pitch limit in the opening night of Valley’s All-Star Tournament. On Saturday, Valley will face Dadeville at 4:30 EDT while Beulah faces Reeltown at 3 p.m. EDT.

LANETT — Springwood School is giving young softball and baseball players a chance to sharpen their skills next week. From... read more