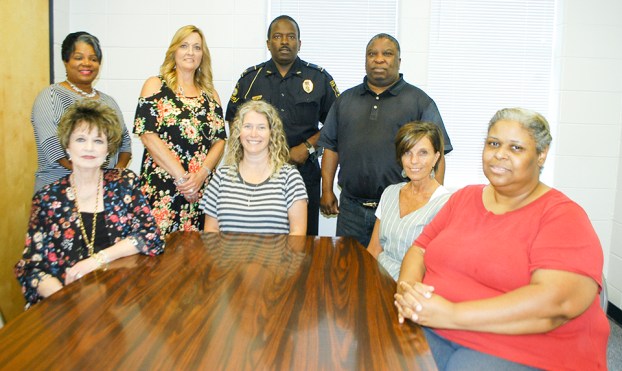 One Stop provides counseling for juveniles

LANETT — The blue top building at the L.B. Sykes complex in Lanett is a busy place on Wednesday afternoons.

An average of 50 juveniles from throughout Chambers County are there to receive one-on-one counseling from the local juvenile probation, mental health and DHR departments. The program is called Chambers County One Stop, and the goal is to improve the lives of children. Children served by the program range in age from three years of age to 19 but typically fall in the 10-17 range.

The consensus among them is that they don’t do what they do for the pay; they do it for the reward of knowing they’ve turned someone’s life around at a critical stage and perhaps save someone from a life of crime, incarceration and maybe even an early death.

“We all work together,” said juvenile probation officer Larry Billingslea. “It’s truly a joint effort. People around the state are amazed at the resources we offer for probation. We are on call 24/7 for many types of situations that can come up. It can be children in need of adult supervision, dependency cases, or children being removed from a home. We are all on the same team and work together.”

Local intervention can keep kids out of youth services and stays at places like Mount Meigs.

“There’s a wide range of problems to deal with,” Billingslea said. “It can range from school truancy and shoplifting, to burglary, theft, drug charges, domestic violence and assault. You name it, and we have to deal with it.”

One Stop has been in Chambers County for the past ten years. There have been many success stories in that period, but there’s an increasing amount of work to be done. Those involved in the program said they are continually witnessing the erosion of the family unit. Illegal drug use is involved in some way in at least 90 percent of what they see.

“You can’t see people as a number,” Whaley said. “Every situation is different. There are no cookie-cutter solutions. Sometimes you will spend an hour on a case and sometimes much longer than that.”

What’s key here is that no one person decides what to do.

“We make decisions collectively,” Whaley said. “We value each other’s experience and respect their advice. People from other counties ask us for advice in how to handle certain cases.”

The foster parent program in Chambers County has been enormously successful over the past decade.

“Our foster parents are top notch,” said DHR Director Julia Ann Hyde. “I would put them against anyone else in the country.”

The problem here is that there’s a rising demand for them due to the continual breakdown of families. Ten years ago there was a total of nine foster families in the county. That number has since been close to 90 and is currently in the 70s.

Billingslea commends local schools for working well with One Stop.

“We have some really good school officials,” he said. “The superintendents and principals have worked well with us, and we appreciate that. There’s mutual respect for each other, and we can get a lot accomplished with that.”

Hyde said that when families are dysfunctional it always flows down to the children. “What we do every day is challenging,” she said. “But it’s rewarding. None of us would do what we do if it wasn’t.”

Hyde said that in some cases, young children are taken from their mothers and held temporarily while the mother goes through a therapeutic program. If they successfully complete it, the child goes back to her custody.

Billingslea said that one of the biggest problems they deal with is the lack of responsible parenting. The parent, he said, does not respect authority and their children learn that. “They will question what we are doing in front of their kids,” he said. “It’s almost like they are deprogramming their child.”

Hyde, who’s been with the Chambers County DHR for 44 years, said that counselors see heartbreaking things every day, and there’s so much of it. There’s an average of 18 children per DHR worker.

“You can see things that can make you bitter, but it’s our job to make it better,” she said. “It’s important to work together to do this. I can’t say enough for the collaboration and respect we have for each other. You can get more information due to this. We talk to each other, share information and e-mail each other frequently. That’s a major reason for the success we’ve had.”

Billingslea said that social media is a factor in the social problems that are taking place today.

“Violent crime has been increasing for the past 10 years,” he said. “It’s more widely accepted by society. Kids are seeing so much on their cell phones and think it’s OK. They think it’s OK to behave that way. Not enough parents are looking at what their kids are seeing on their cell phones. They are inappropriate posts and videos on those phones, and parents are oblivious to it.”

Williams said that mental health is a 24/7 concern.

“When you are called by the police, the children are in danger,” Hyde said. “You have to go to that right away. People don’t realize how different things are now than they were just ten years ago. When I started in DHR, it was much easier than it is now. It’s now a 24/7 job.”

At the end of the day, it’s all about helping children.

“We wouldn’t do what we do if we didn’t love those kids,” Whaley said. “We don’t do what we do for the pay or for convenient hours. There’s lots of paperwork to do, and there’s never a dull moment. I know that foster parents don’t get the credit they deserve. They have to put up with a lot. We want children to be happy and well-adjusted, even if that means having them in a new environment.”