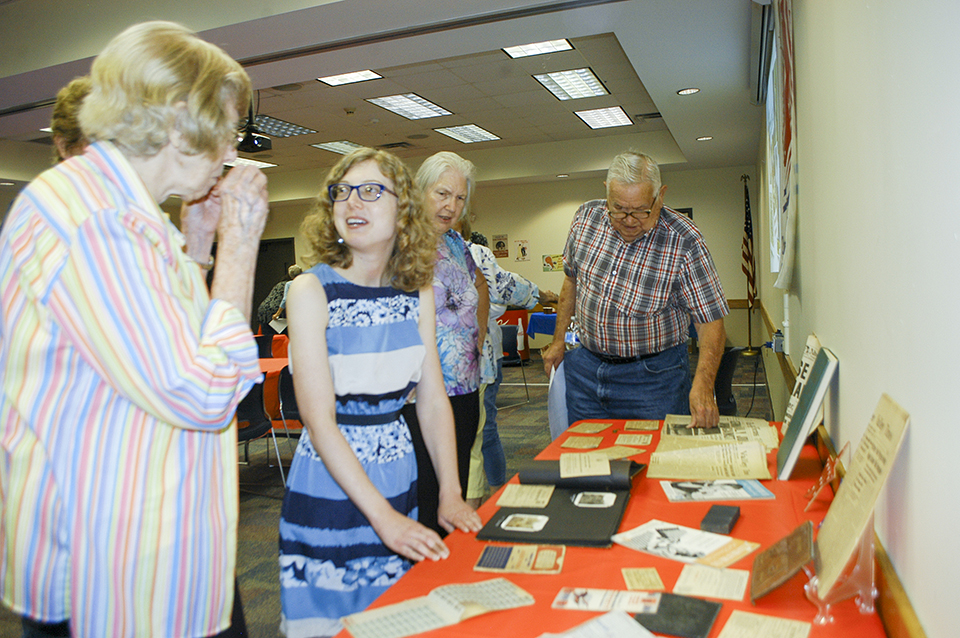 VALLEY — Attendees at a Friday Lunch N Learn program at Bradshaw-Chambers County Library had the chance to sample the kinds of foods Americans ate during the rationing days of World War II and heard a presentation from archivist Robin Brown on the sacrifices made on the home front during that period.

Dishes served during the event included lettuce sandwiches, pear and cottage cheese salad, celery with carrot-peanut filling, cream cheese and dried beef spread, macaroni and cheese, macaroni and cheese with spam, all topped off with chocolate mayo cake and served with cold water.

The entire country had a sense of shared sacrifice on Dec. 8, 1941, when President Franklin Delano Roosevelt announced that the nation was at war following the famed “Day of Infamy” speech. That same day, soldiers from Fort Benning were sent to West Point to have a 24-hour guard at the river bridge. They would remain there for more than a week.

On Tuesday, Dec. 9, West Point Manufacturing Company President George H. Lanier issued a statement calling on citizens to do their patriotic duty and support our country. “The days ahead will not be easy ones, but our way is clear,” he wrote, “and with a unity of purpose, there is no doubt of our ultimate victory.”

“Tires became the first product to be rationed,” Brown said. “In Jan. 1942, Japan captured Malaya and the Dutch East Indies – the primary countries where rubber was produced. That cut off 91 percent of the U.S. rubber supply. This meant rationing at home. People were not allowed to buy new tires.”

Special permission was given for doctors, nurses, fire and police departments and farmers to get them when needed.

“In May 1942, rationing began for gas,” Brown said. “Most drivers were limited to four gallons per week. A victory speed of 35 mph was put in place to help conserve tires and gasoline.”

Remembering that WWI had been a period when sugar was rationed, many housewives began stocking up on it the day after the Pearl Harbor attack.

“Rationing for this food staple began on May 5, 1942,” Brown said. “Sugar was the first food item to be rationed, and it would be rationed for the longest period of time. It wouldn’t be until June 1947 that Americans could put as much sugar as they wanted in their coffee, tea or cakes.”

The shortage of sugar was the result of the Japanese occupation of the Philippines, where many of the sugar fields had been destroyed and not replanted until after the war.

In April 1942, American families began registering for ration books. In May, they began receiving Ration Book 1, commonly called the sugar book. One stamp from the book allowed for one pound of sugar.

Coffee rationing started in Nov. 1942. Special stamps were printed for coffee. People older than 15 years of age were allowed to have one pound of coffee every five weeks. “That was enough for one person to have one cup per day,” Brown said. “Thankfully for coffee addicts, this ration didn’t last too long. It ended in July 1943. Beans from South America were available and could be shipped here. Coffee once again became the best part of the morning.”

Brown said that rationing had a two-fold purpose. It provided a means for scarce goods to be distributed on a fair basis, and it helped keep prices reasonable at the same time. It also kept inflation down and the dollar strong.

“A black market did spring up,” Brown said. “Those with connections and willing to pay more than the ceiling price were said to ask for a ‘Mr. Black.’ Inflation was also reasonably well managed, with estimates placing it at around 9 percent.”

Most Americans supported rationing, seeing it as their patriotic duty. Polls taken at the time showed support of around 90 percent.

“Rationing wasn’t unusual at that time,” Brown said. “Those who had lived during World War I remembered voluntary rationing.”

Europeans were also living on rationing and had a much more difficult time securing food than did Americans.

“Some Britons subsisted on a meager diet of 800 calories a day,” Brown said.

Every American, from babies to adults, was assigned ration points. Even the president had a ration book, and First Lady Eleanor Roosevelt kept close watch of the White House kitchen to see that rationing rules were strictly obeyed.

“As the war continued,” Brown said, “more things were added to the rationed list. Meat was put on the list in March 1943. This was done because the military needed 7.5 billion pounds of meat. There wasn’t exactly a shortage, but the military bought the quality cuts, like steaks and roasts. Cheese and butter were also added, along with cooking oil, canned and processed goods.”

“The homemaker had a lot on her plate,” Brown continued, “One of the most popular dishes of this period remains a favorite – macaroni and cheese. Cheap, filling and delicious, it became a nationwide hit in WWII. Kraft sold around 50 million boxes during the war.”

Even though sugar was scarce, people still found ways to enjoy something sweet.

“My grandmother remembers eating a cake made with mayonnaise,” Brown said. “The recipe used mayo in the place of eggs, butter or shortening, which were rationed.”

Those who sampled mayo cake at the Lunch N Learn found it to be rather tasty. It was not as good as the real thing, but great when thinking about what the troops were going through.

“Canned and tinned foods were hard to come by,” Brown said. “They were easier to ship overseas. Americans were encouraged to eat fresh and local.”

Americans were encouraged to grow vegetables in Victory Gardens.

“They sprang up everywhere,” Brown said. “They had one at a zoo in Portland, Oregon, near a parking lot in New Orleans and even at the Cook County Jail in Chicago.”

Authorities found out quickly that it wasn’t a good idea to grow corn at the jail — the tall stalks could aid prisoners who wanted to escape.

It’s estimated that there were 20 million Victory Gardens in the U.S. during WWII. The most popular produce grown included beans, beets, cabbage, carrots, kale, peas, lettuce, tomatoes, turnips, squash, and of all things, Swiss chard.

Some of his scrapbooks, which were donated to Cobb Archives, have photos of his 1942 Victory Garden in Langdale.

Those photos were on display at Friday’s program, along with ration books signed by Hall, his mother, Flora, and sister, Lennis.

“Those gardens yielded tons of food,” Brown said. “To keep it from spoiling, much of it was canned. It’s estimated that in 1943 four billion jars of food were canned.”

A community canning plant, commonly called the cannery, opened on the south end of Langdale Mill in June 1943.

“Its first week, more than 88 families used the cannery to preserve more than 2,500 pounds of food,” Brown said.

The Langdale cannery had a daily capacity of 6,000 cans. In less than a year, more than 117 tons of food were preserved in the local plant. For the most part, vegetables were preserved, followed by meats, then fruits.

“The home canned food not only made living with rationing easier, it also allowed people to send homemade food overseas,” Brown said. “More than 220 cans of candy, nuts and cake were sent to local soldiers. The cannery at Langdale was one of 6,000 canning centers in the U.S. by 1945.”

Brown said that women played a significant role on the home front during the WW II years.

“They kept their households running with limited resources,” she said. “Many became first-time gardeners and canners. They were lauded as ‘soldiers without guns,’ doing their part to secure an Allied victory.”

Lunch N Learn attendee Early McKnight was a boy during the war years and can remember the color of ration stamps and tokens determining what one could purchase with them. He said he could remember going to a grocery store in downtown West Point on a day a limited supply of lard was on sale. It was going for one pound for one stamp. When it sold out, women were fighting for it, taking it out of other women’s shopping carts and racing to the check out line.