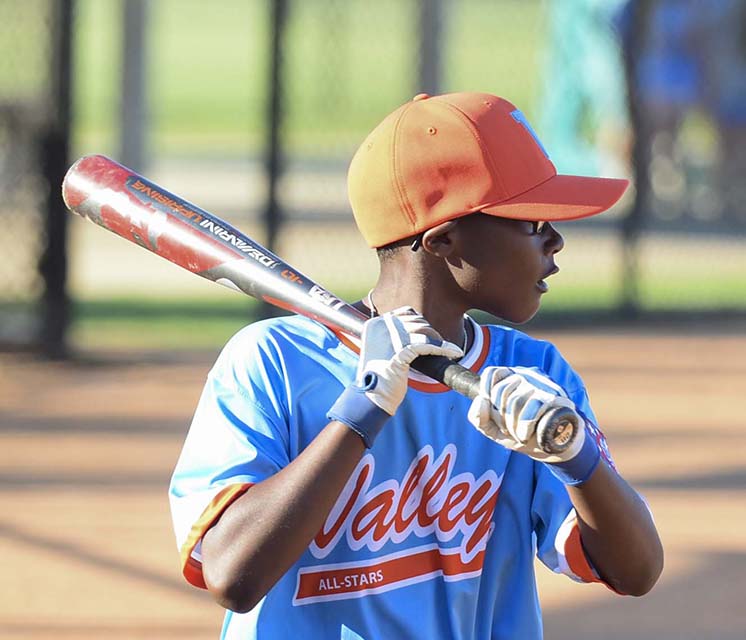 Rashad Milligan | Times-News locked in prep: Valley All-Star Zephi Madden, who has been tagged with the nickname “bunt king,” prepares to hit during batting practice.

VALLEY — A group of local All-Stars is headed to the state tournament. After securing a 3-2 victory over Beauregard on Wednesday night, the Valley 9 and 10-year-old All-Star baseball team won the District 10 triple A tournament.

“When we host [tournaments], we would want nothing else but to win it,” Valley parks and recreation athletic director Mark Hudmon said.

Community support grew for the team by the game, and created an unprecedented atmosphere for summer little league baseball games at the Valley SportsPlex. Fans packed the bleachers from the opening night matchup against Beulah.

“We’ve had some outstanding crowds,” he said. “Valley has really supported this team. A lot of people who don’t even have [direct ties to the team] are coming out and watching them. There’s been a lot of support every night we played.”

Logan Seymour went the limit of 75 pitches before coming out in the sixth inning of the championship win, giving up two runs. Mason Yarbrough then came into the game to finish the effort.

Beauregard scored both of its runs early in the ballgame, while Valley scored one in the first inning, before scoring the go-ahead run late in the contest, according to Hudmon.

The state tournament begins in Tuscaloosa on July 12. While the Valley All-Stars know Bellingrath is the team’s next opponent, the exact start time and date time for the game are unknown as of Thursday evening.

The Valley majors, ages 11 and 12, team went 1-2 in the district tournament. The team lost to Dadeville and Russell County, and defeated Beulah. The team now advances to the state tournament.

The Valley Double A 7 and 8-year-old team is playing in the division two district tournament this weekend in Dadeville. The team plays Dadeville on Friday night at 6:30 p.m., according to Hudmon.

The 7 and 8-year-old girls, as well as the 9 and 10-year-old girls team, will both compete in the Alabama Recreation and Parks Association (ARPA) District 5 tournament on June 29 in Talladega. The top two teams out of that bracket also advance to the state tournament in Montgomery at Lagoon Park on July 12 through July 14.