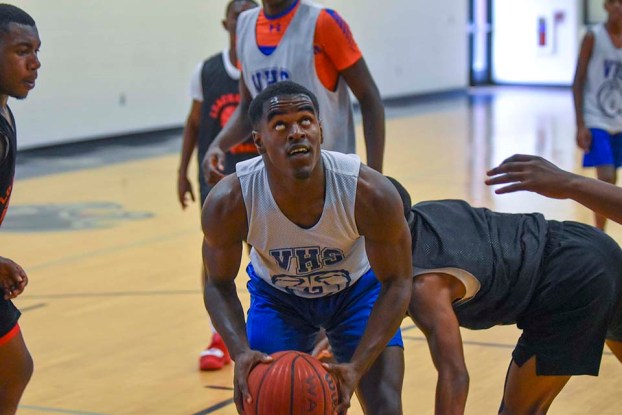 SMITHS STATION — The Valley boys basketball found its groove during Monday’s play date at Smiths Station High School. The Rams swept the day with a 52-48 win over Auburn, a 35-19 win over Loachapoka and a 59-26 finale victory over Beulah.

“We played better defense, we played intense defense and we trapped a few times,” Valley boys head basketball coach Marshon Harper said after the second game of the day against Loachapoka. “We ran plays a little better in this game. [We’re] being patient, working on cutting, setting the pick, setting them up for the pick and roll and running the offense. I think they were patient [on Monday]. We just have to learn how to finish games.”

In the first game against Auburn High School, Valley carried a 20-point lead for most of the game before the Tigers made a run in the second half to cut into the deficit, which resulted in only a four-point differential in the final score.

“We’re trying to play everybody during the summer to see who we got, who we’re working with and I think we did a good job,” Harper said.

Valley played full-court man-to-man defense throughout the day, and got off to a 9-0 lead against Loachapoka. The corps that has previously been donned the nickname of the “Running Rams” swarmed opponents on Monday by quickly entering passing lanes and outrunning opponents on fast break opportunities.

2018-19 All-Valley Area Boys Basketball first team member Kintavious Dozier looks like he’s gained more confidence in his role as a starting varsity guard. The junior doesn’t appear to be settling for as many threes as he did last season, and he’s shown more aggression driving to the basket. Junior guard Demarice Farrow has also added another three-point option coming off the bench for the Rams this summer. Junior Jacquez Trammell continues to use the vertical that won him the 5A boys state championship in the triple jump to soar above opponents to grab rebounds and block shots. Sophomores K.D. Hutchinson, Kalen Sharell, M.J. Atkinson and B.J. Baker use their athletic skillet from football to help Valley on the court as well.

“We worked out this morning,” Harper said. “We got up, and worked out at 10 this morning, went in to work out, got on the bus and came to play today. We’re going to condition every day. We’re lifting weights, and the best thing about it is that they’re beating me to the gym and to the weight room, that’s a good thing. We shot Saturday and Sunday. I told them that we’re going to try to get up as many shots as we can during the week, we’re going to try to get stronger and they’ve been doing a good job.”

Off the court, the Rams have encouraged one another to participate in bonding events to spend more time together.

SMITHS STATION — Monday did not go as planned for the Beulah High School boys basketball team on the scoreboard,... read more