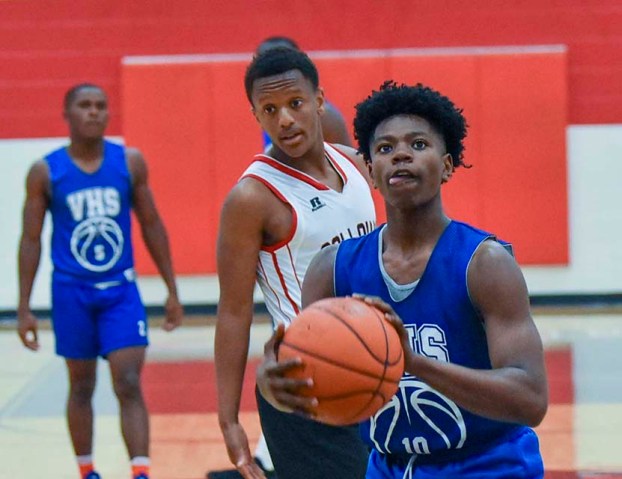 HOGANSVILLE — The Valley Rams boys basketball team was back in action on Thursday afternoon for a summer play date at Callaway High School.

Valley lost the first contest of the day 60-57 to Callaway.

“I feel good,” Valley boys head basketball coach Marshon Harper said. “We played hard, played some good defense, good offense, slowed the tempo, we were fast at times, slow at times, for not having a veteran team, I think we played very well.”

Valley trailed by eight at the half and Callaway carried a steady double-digit lead throughout the match up until the Rams made a run midway through the second half to cut the deficit to two with five minutes remaining.

“We played man, they were up in your face,” Harper said. “We played hard man, good help side, we moved our feet well, we talked on defense and that’s what it’s going to take during the season. I think we’re on the right road.”

Shortly after Valley’s run, the Cavaliers pushed their lead back to two possessions and pulled out the victory.

“I think we have to have better leadership [in those situations], we have to take care of the ball,” Harper said. “We had two turnovers at the end right there with a chance to go up by one or two. Cutting down on turnovers comes with the experience of winning games. I think we did a good job.”

Valley ended the day with a 70-38 win over Greenville.

“I expect big things,” Harper said of the upcoming season. “Sweet 16, nothing less than Sweet 16. That would be a great stepping stone for them to have a taste of the playoffs and make it. We’re going to take it day-by-day. We worked out this morning, we worked out at 10 this morning, the kids came in excited so I’m thinking big things.”

Valley returns to action next Monday at Smiths Station for a playdate. The Rams will also have a playdate at LaGrange High School before hosting a playdate next Thursday.