West Point Rotary guest teaches about the history of textiles 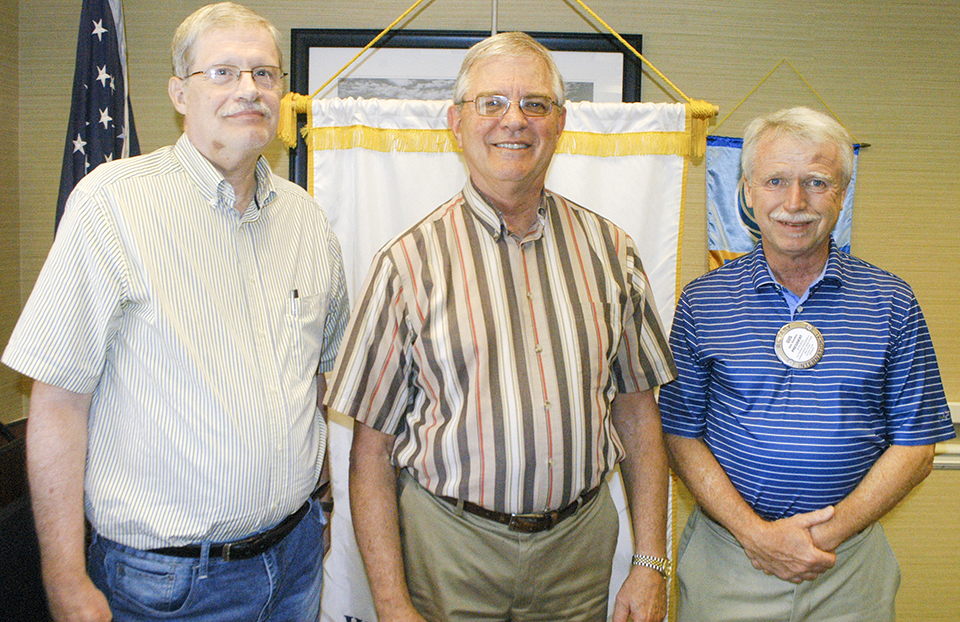 Eddie Lanier (at center) was the guest speaker at Thursday’s noon hour meeting of the West Point Rotary Club. He discussed the history of cotton and textile production in Alabama. At left is Curt Kollar, program chair, and at right, Gus Darden, club president.

LANETT —Eddie Lanier, the guest speaker at Thursday’s noon hour meeting of the West Point Rotary Club, talked about the decline in U.S. textile production in a historical presentation to the group gathered.

Lanier is the director of environmental services for WestPoint Home and one of a handful of employees a once-giant company still has in Chambers County.

Lanier said that WestPoint Home is only about one-tenth of what it once was. In the early 1990s, for example, the company then known as WestPoint Stevens was the nation’s number one producer of sheets and number two producer of towels. That’s when imports started to have a major impact. At that same time, the company was struggling under an enormous debt it had taken on during the Farley era.

The company would eventually come under the control of Carl Icahn in a bankruptcy settlement. What was left of domestic production was almost entirely offshored. When WestPoint Home ceased production in the Valley in 2008, local unemployment soared to 22 percent in February 2009.

There’s been an economic resurgence in the local area since then, but there’s still some lingering bitterness in the area over what happened to textiles in a relatively short period of time.

Lanier said that when imports started to take over the market in the 1990s, the first domestic sector to go under was apparel production. Next came sheets and towels. That’s where WestPoint Home was hard hit.

The big push in going offshore, Lanier said, wasn’t so much from the industries themselves but from the retailers.

“They wanted offshore production,” he said. “Almost all Alabama plants were closed by 2009.”

The loss of textile production has impacted other industries. Textiles were once Alabama Power’s best customer. At one point, WestPoint Pepperell’s power bill was over $1 million a month in the Valley area alone. Other major power users have filled that gap, but the Valley isn’t the major player it once was.

Alabama has often been called the Cotton State, first for growing it and later for manufacturing it into finished goods. In 1860, cotton accounted for 60 percent of U.S. exports with the port of Mobile being the busiest place for that. One hundred years later, in 1960, there were 125 textile plants and 40,000 textile workers in Alabama. One out of every $5 in wages in the state went to a textile worker.

Textile production became very important to Opelika in the 20th century, first with the Opelika Manufacturing Company and later on with Pepperell Manufacturing, which came south from Maine, bringing its well-known dragon logo with it. The symbol later morphed into the griffin WestPoint Pepperell would be famous for.

Lanier said that Alabama Power had a role in Pepperell coming south.

“In the 1920s, they sent manufacturing recruiters to a cotton exposition being held in Boston and convinced them to come south,” he said.

Pepperell almost passed up coming to Opelika. Company leaders met with community leaders to discuss the incentives they’d need to come. They were asking for funds in the neighborhood of $30,000 but when local officials balked they told them they’d go somewhere else in Alabama.

“They had a prayer meeting that night and got back in touch with them the next day, offering $62,000,” Lanier said.

It was the kind of offer they couldn’t refuse.

Pepperell would go on to have a major presence in Opelika. Its Opelika finishing plant was widely regarded as one of the best such plants in the U.S.