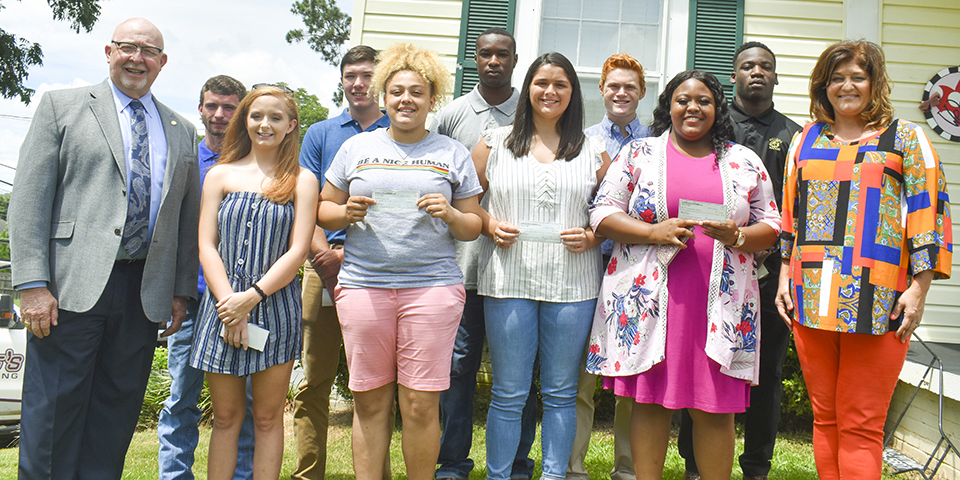 The scholarships were presented by Rep. Debbie Wood, R-Valley, and Sen. Randy Price, R-Opelika, outside of Wood’s Century 21 Real Estate in Valley. Wood said the money generated for the scholarships came from a cigarette tax placed on Chambers County consumers several years ago at $0.25 per pack sold.

The tax is broken up to several organizations in the county, with the Chambers County Development Authority getting 48 percent of the funds generated each year. Additional breakdown of the tax sees 25 percent going to the Fire and Rescue Fund, Chambers County’s general fund, 8 percent to the Water District Fund, 2 percent to Valley Haven School and 2 percent to scholarships.

Wood said students for the scholarships were chosen by speaking to local city council members and county commissioners who knew students who were going to college but didn’t get many scholarships. This was a different take than previous years when the scholarships recipients would be identified by guidance counselors.

Wood said this is an example of local dollars spent in Chambers County coming back to those in the region.

“That is why we get a little upset when people start buying cigarettes online or out of state because it hurts us locally,” she said. “I think this is a great way for people to understand that when they shop at home, it does matter. When you get on the internet and get things, it doesn’t help us here.”

Wood said there have been preliminary talks between Price and herself to establish a Bramblett scholarship for students in Valley and Lanett. However, the details of that scholarship have not been finalized.

“It is a desire of ours to do that,” she said. “This is all new, and we have to get a few more details figured out.”

Price said it is important to remember this tax not only helps students but also volunteer firefighter organizations who are looking for different avenues to raise funds.

“When people shop local, that money is staying at home, and it is helping the organizations within the county,” he said.

Wood said legislators in the area are hoping to expand the bill further to include vaping products.