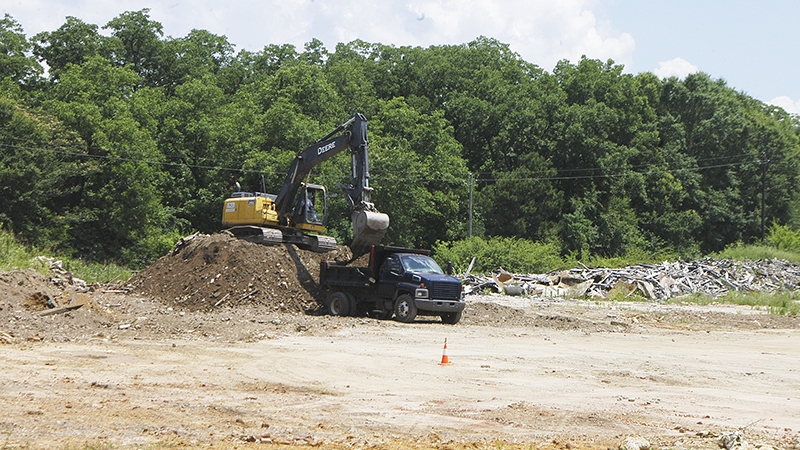 The City of Lanett has owned the Lanett Mill/Lanett Bleachery & Dye Works site for two weeks now. An impressive amount of cleanup work has taken place in a short period of time, but there’s a vast amount of work yet to be done. A single trackhoe did much of the work over the first two weeks. It’s now been joined by a second one, which should help speed up the work. --Wayne Clark

LANETT — Two weeks of cleaning up on the Lanett Mill/Bleachery & Dye Works site has made a visual difference. There’s a noticeable change in the area around the water tower and on the dye works site.

“What we wanted to do first was to clean up as much as we could near the highway. This is not an easy job and will take some time,” said Lanett Planning and Development Director Tony Chandler. “There’s just so much metal, broken concrete and brick. Most of it is in piles, but it’s all over the site.”

There are a couple of trackhoes working the site now. A huge debris pile on the dye works site has been completely leveled, and smaller piles are now being moved. Debris is being loaded onto big trucks and hauled to the back of the site where berms are being formed.

“There’s a creek flowing across the mill site toward the river,” Chandler said. “When we first started working there, we thought it was a drainage culvert, but it’s a creek. There are fish in it as big as your hand.”

That doesn’t mean it’s a good place to go fishing. The site is not a good place to go walking around, and city officials are asking people to stay off it until the cleanup work is finished. There are sharp objects that are easy to step on, and something else near the creek — snakes.

“One day last week we uncovered a bed of water moccasins near the creek,” Chandler said. “There must have been 15 of them, most of them a foot-and-a-half long. They were coiled and striking at the (trackhoe) bucket. We had a lot of guys scattering when they saw that.”

The bed of snakes was located only a few feet away from the sidewalk where people walk every day.

“The day before we uncovered them with the trackhoe next to the stream, I’d been standing there for much of the day,” Chandler said, adding that it gave him chills to think about that.

There’s no set timetable in getting the site cleaned up. Mayor Kyle McCoy has said that people will be able to see a big difference within the next year.

There’s already a noticeable difference in just two weeks, but there’s still a tremendous amount of work to be done, especially on the south side where most of the mill buildings were.

Most of the work over the first two weeks was done with a single trackhoe. A second one was on the site Monday morning. Having two of them plus a couple of big trucks to haul away debris will help in getting the work done.