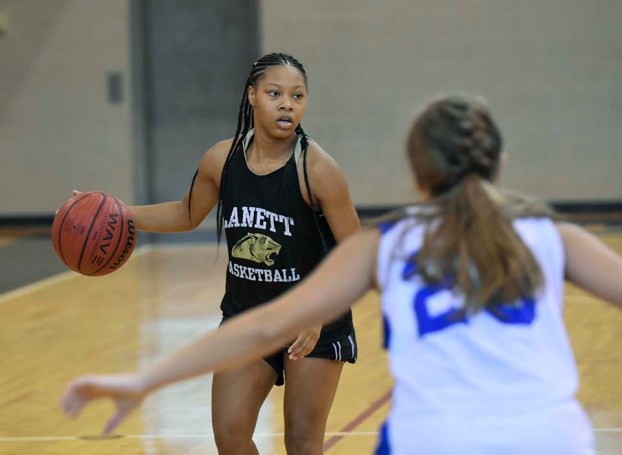 BEULAH — The future of the Lanett girls basketball program is looking up.

The Panthers are returning a corps that features eighth-grader Laila Lancaster, freshman Ameria Zeigler-Truitt, freshman Ariel Hall, freshman Samahria Davidson, sophomore Breanna Glaze, junior Alyse Madden and junior Jayla Higgins. Many of the freshmen had playing experience on the varsity level near the end of last season. Lancaster was with the varsity team for most of the year in addition to playing on the junior high team.

“I’m young,” Lanett girls head basketball coach Charlie Williams said before smiling. “I don’t know if it’s going to be me or somebody else, but someone’s got a bright future at Lanett. The future’s bright.”

The Panthers will have one senior on next season’s roster in Alicia Abner.

During a play date at Beulah High School on Friday, Lanett’s young roster went toe-to-toe with the Reeltown senior Taniya Haynes and sophomore Makayla Langston in a 21-20 win.

Zeigler-Truitt scored three points the old-fashioned way after Davidson grabbed a steal in Reeltown’s backcourt with 18 seconds to go in the first half to give Lanett a 9-7 lead going into the break.

At the start of the second half, Davidson continued to make hustle plays on the defensive end of the ball and grabbed a couple of more steals.

“They [Lanett] really brought the defensive energy, and I loved that,” Williams said. “That’s one of the things that I couldn’t do a lot of last year because of injuries, but I can do it this year, which is turning up the defense.”

Reeltown regained the lead with four minutes remaining in the second half when Langston put the Rebels up 15-13.

“I tried to use our height with Laila Lancaster [on Langston],” Williams said. “Laila Lancaster did a great job on her in the first half. I also tried to put my muscle of Alicia Abner and Alyse Madden on her for a little while, but she’s a good ball player. I’m glad they’re [Reeltown] not in my region again this year. They’re a good club.”

“This is the season [for Madden],” Williams said. “Your junior year is always your year that you’re either going to be on the map and make a dot on that map, or you’re going to get looked over by somebody younger and better. This is the year for her.”

A free throw from Langston and a jumper with 50 seconds remaining allowed Reeltown to tie the game again at 19.

Higgins then stepped to the foul line with 30.6 seconds and converted one of two free throws to give Lanett a one-point lead. Langston then got to the foul line and made the first shot for Reeltown to tie the game with 15 seconds remaining.

A Reeltown shooter then got fouled with 9.6 seconds remaining, but missed all three free throws after initially coming up limping after the foul. After the third miss, Lanett grabbed the rebound and moved furiously up the floor when Zigler-Truitt decided to take matters into her own hands and drive into the lane to draw contact with 2.6 seconds remaining. The freshman guard’s make on her second attempt was enough to give Lanett the one-point victory.

“[I] have four years of basketball to look forward to I guess,” Williams said of his freshman class before laughing. “It’s exciting and overwhelming at times. They’re so young, and there are things that you expect them to know about basketball and sometimes they actually don’t know it because they’re so young. Then you see them make a basketball play that you’ve been teaching, and you say ‘okay. It’s coming along, they’re starting to get it.’”

HOGANSVILLE — The Valley Rams boys basketball team was back in action on Thursday afternoon for a summer play date... read more