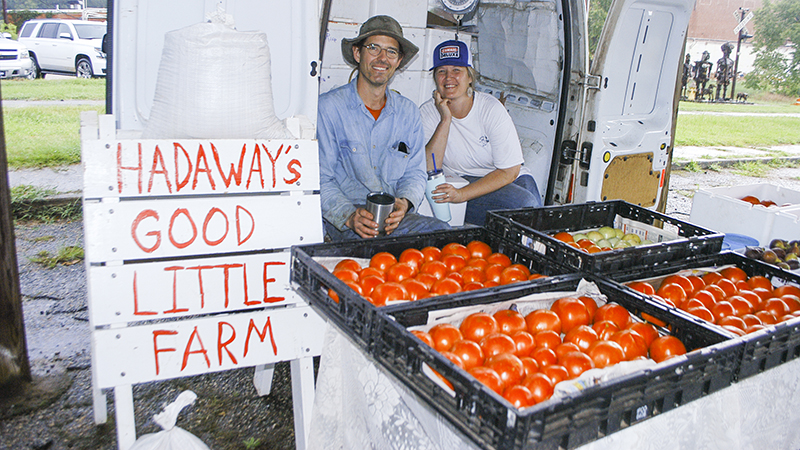 VALLEY — A total of 350 tomato sandwiches were given away at last Friday afternoon’s Free Tomato Sandwich Day at Valley Farmer’s Market. Despite some rainy weather, a good turnout was on hand, and the Farmer’s Market pavilion offered plenty of room for everyone to stay dry.

Providing the tomatoes this year were Will and Liz Hadaway of the Good Little Farm in Union Hill and Walter Pulliam, who has a farm near LaFayette.

The Hadaways and plenty of vine ripe tomatoes on sale at the Friday market.

Liana and Anna Freeman of Serenity Farm & Bakery, Auburn, had some delicious offerings on sale this past Friday. They had freshly baked sourdough bread, cinnamon rolls, banana-wheat nut bread along with lemon-blueberry, pina colada and zucchini pies.

Mack Wilson and grandson Davon Williams of Notasulga had a truck load of Crimson Sweet watermelons for sale.

“I’ve had good luck with my watermelons, okra and peas this year,” Wilson said. “My muscadines and scuppernongs are doing well, too.”

Wilson grew up on a farm and good a good education. He’s taught horticulture at the collegiate level at such schools as Florida A&M, Tuskegee and Southeast Missouri State. At one point in his career, he served as a consultant for approximately three months on vegetable farms in Romania.