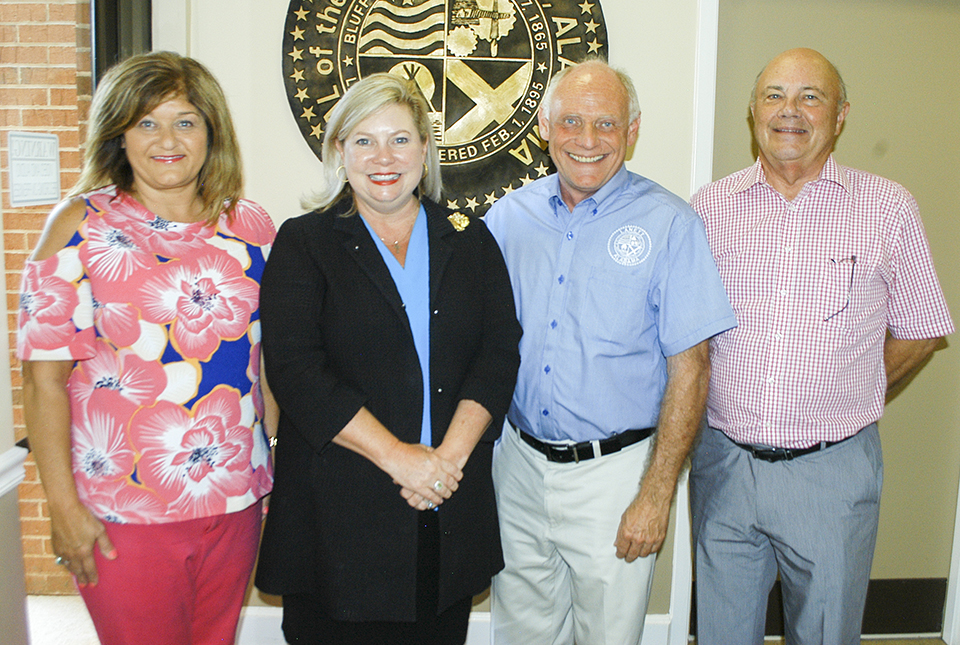 Alabama Public Service Commission President Twinkle Cavanaugh (second from left) was in Chambers County on Monday. It was part of a three-county tour to meet constituents and ask them about their needs. She was accompanied on her local visits by State Rep. Debbie Wood (far left) and State Rep. Bob Fincher (far right). They met with Mayor Kyle McCoy (third from left) in Lanett.

LANETI — Alabama Public Service Commission President Twinkle Cavanaugh stopped by city halls in Valley and Lanett on Monday while making visits to local officials in east Alabama. Cavanaugh was elected president of the PSC in 2012, reelected in 2016 and will be seeking an additional term in 2020.

Cavanaugh said she is talking about efficiency in government during her community visits.

“I was in Lee County this morning and will be in Randolph County later today,” she said. “I am trying to visit every county in the state and talk to people about their concerns. If you don’t talk to the citizens, you can lose touch with what matters to them.”

Cavanaugh said that since 2012 the PSC has lowered the rate of return on all utilities in the state.

“I campaigned on cutting the size and cost of government,” she said. “We have reduced staff from 110 to 72 and cut the number of vehicles by half.”

Cavanaugh said she’d never forget making a trip to the Valley when she was a student at Auburn University.

“I made a trip to the WestPoint Stevens Mill Store,” she said. “I remember purchasing a peach-colored matching twin-bed spread for $19. My mother was very frugal and told me not to spend more than $20 at a time. That spread was perfect for me.

”One thing Cavanaugh is known for is her campaign signs. She became a trend setter back in 2012 with the larger-sized ones. Everyone’s using them now.

“We put 10,000 of them all across the state,” she said. “We were on a low budget and managed to do a lot with a little. I love political signs. I call them flowers of democracy blooming all over our state.”

Cavanaugh was motivated to seek high goals by an eleventh grade math teacher she had at Jeff Davis High School in Montgomery.

“She told me I’d never graduate from college unless I changed my first name,” Cavanaugh said. “I admit to having had a hard time growing up with it, but it’s the name my mother gave me, and I’m proud of it.”

In December 2012, she was at a GOP meeting sponsored by the Farmers Federation. Newly elected Republican candidates were being introduced by Karl Rove.

Cavanaugh was accompanied on her three-county trip by State Reps. Debbie Wood and Bob Fincher.

Fischer said that Chambers County had been undergoing a remarkable transition since the final offshoring of WestPoint Home jobs in 2008.

“A great job has been done in the way of new job creation,” he said.

The PSC was established by an act of the Alabama Legislature in 1915 to primarily replace the State Railroad Commission. The PSC’s responsibility was expanded in 1920 to include regulating and setting rates that utility companies charge their customers for electricity. The legislature expanded the PSC’s responsibilities in later years to include those companies that provide gas, water and communications, as well as transportation common carriers such as trucking and air carriers. The PSC effectively determines the rate of profits that most of these companies are allowed to earn.