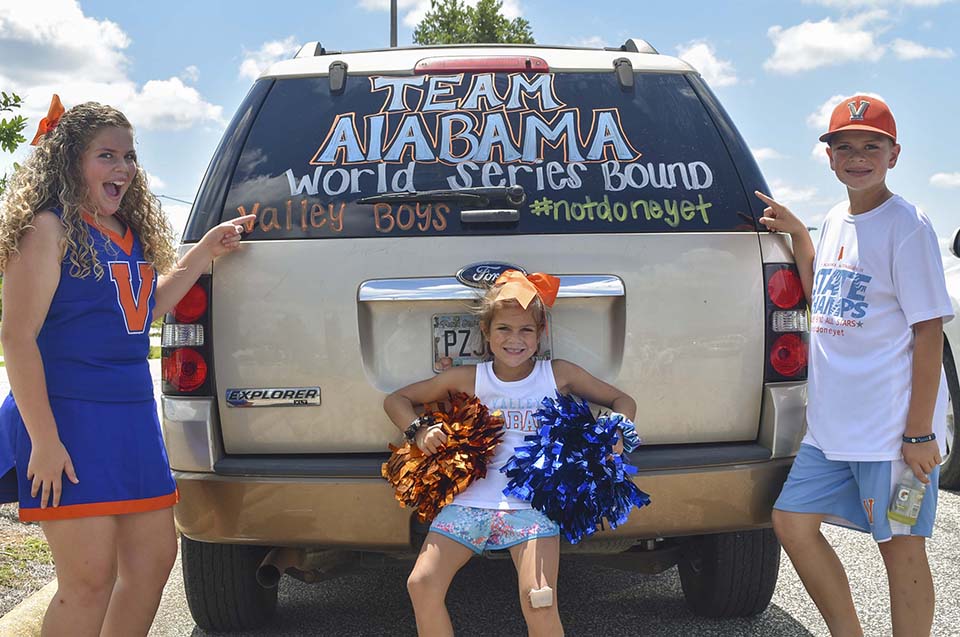 Rashad Milligan | Times-News awesome andrews: Valley 9 and 10-year-old baseball all-star Hunter Andrews, pictured right, and family pose with one of the decorated cars at Wednesday’s sendoff for the team.

VALLEY — On Wednesday afternoon, the Valley 9 and 10-year-old all-star baseball team enjoyed one more pep rally in Alabama before heading off to Lumberton, North Carolina for this year’s Dixie Youth World Series.

“That was great,” Valley all-star coach Shane Andrews said of the ceremony. “Everything’s been great. We’ve played in three tournaments, the district, the state and now the world series. The outpouring of love from the community has been phenomenal, and I wouldn’t expect anything less from the city of Valley.”

Players got into their parents and guardians’ cars, many of whom were driving decorated-Valley painted vehicles supporting the team, as they left the Sportsplex parking lot and began the six-hour voyage to Lumberton. The common theme for the state champions was the “#NotDoneYet” hashtag that the team has adopted during its undefeated tournament run.

Among the sendoff attendees were Valley mayor Leonard Riley, W.F. Burns principal Frankie Bell, as well as the directors and department heads of Valley Parks and Recreation.

“A lot of these parents, a lot of these kids, these families, have had to change their lifestyle in the last two months to do this,” Andrews said. “There have been so many late nights out here practicing. All of those dinners that people have provided for us where the kids get done practicing at 8:30, 9 p.m. and then they can eat dinner, parents don’t have to worry about feeding them, it’s been huge. It’s been a blessing. The city of Valley has really stepped up, and I’m proud to be from the Valley.”

After hours off iPad browsing, pit stops and movie watching, the players arrived at the Carolinas on Wednesday evening. The all-stars plan to stick with the routine of warming up and saying a prayer with Alison Yarbrough before heading into the competition.

Festivities for the World Series begin on Thursday afternoon for skill competitions. All 12 Valley players will participate in either throwing or base running competitions, while Jax Miller is scheduled to step up to the plate in the home run derby.

“I think Jax has a very good chance,” Andrews said. “Jax has been around with me now for over the last two years. I’ve taken him to a lot of places playing baseball and typically, there’s not a lot of kids that can hit the ball the way that he does.”

The AAA bracket that Valley is in is double-elimination, and the first game begins at 12:45 p.m. on Friday against South Carolina.