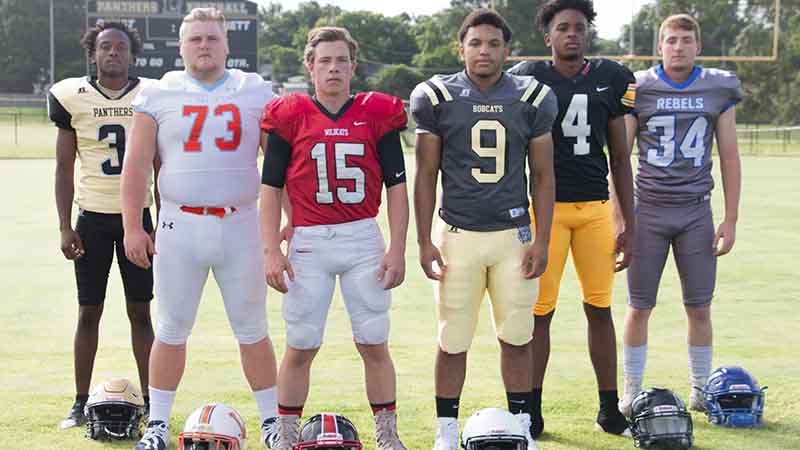 Local football players Quae Houston (Lanett), Daniel Osborne (Valley), Jordan Plank (Springwood), Chris Person (Beulah), Jordan Walker (LaFayette) and Braxton Allen (Chambers Academy) pose for a photo. All six players will be involved in the Gridiron cover vote on social media. One of them, along with a local cheerleader and band member, will be on the cover. --Jenna Oden

For the second consecutive year, The Valley Times-News is letting the community choose the cover for its annual football magazine, previewing the upcoming high school football season.

“Gridiron” will preview the season for all seven local schools — Springwood School, Chambers Academy, Lanett, LaFayette, Beulah, Valley and Troup County. It will include team previews broken down by position, rosters, plenty of photos and in-depth coverage at each school.

The cover contest will take place on The Valley Times-News Facebook, Twitter and Instagram pages and all six Chambers County schools will be represented. Troup High will be included in The LaGrange Daily News contest for its high school football magazine, which will take place in the coming weeks.

The contest will start Monday and end on Friday at 5 p.m.

There are six total cover options, each featuring a mixture of three different schools. A football player from each school was mixed with a cheerleader and band member from one of the other local schools. Since every school doesn’t have a band, band members were used for several photos to ensure each cover photo will include a band member.

“Friday nights in the fall are special. There’s no state that appreciates high school football the way Alabama does, especially right here in Chambers County,” said Daniel Evans, publisher of The Valley Times-News. “However, high school football wouldn’t be the same without the cheerleaders and band members. We’re excited to highlight everyone who plays a big role for our local schools during football season.”

The process to vote is an easy one. The photos will be posted in a photo gallery on The Valley Times-News Facebook page. To vote, pick the cover you want to vote for and click “like” or “react” to the photo.

This gives everyone three ways to vote for their favorite cover. Comments will not be counted as votes on any form of social media.

“Last year we had the contest on Facebook, but we realize people use other social media’s as well,” Evans said. “This allows everyone to pick their favorite — or all three — and cast a vote for their favorite athletes.”

Last year, there were 2,107 total votes cast in the competition.